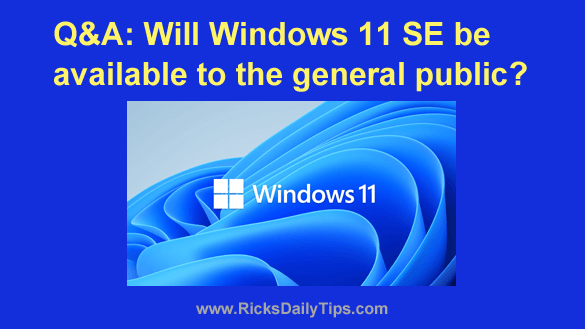 Question from Melanie:  I read an article about Windows 11 SE and they said it was meant to be Microsoft’s alternative to Chromebooks.

That sounds exactly like what I’m looking for because I don’t need anything more than a way to get on the Internet.

I checked on Amazon and a couple of other sites and I couldn’t find any computers that come with Windows 11 SE on them.

I remember reading in the article I mentioned that Windows 11 SE was designed mostly with schools in mind.

My question is will the general public be able to by computers with Windows 11 SE on them at some point?

Rick’s answer:  Melanie, you’re correct about Windows 11 SE being targeted primarily at the education market. And you’re also right about them not being available from traditional retail outlets.

That being said, there’s really no way to know whether those machines will ever be made available to the general public via retail stores.

Question: Can I buy Windows 11 SE at a retail store?

Answer: While we will not restrict sales of Windows 11 SE devices, they are not likely to be available at retail. Windows 11 SE is intended for educational organizations that use cloud-based identity management and security for their students and devices. Most customers buying personal devices would not want the app and management restrictions that these devices come with, so stores are not likely to sell them.

As you can see, that’s sort of a murky answer. While Microsoft says Windows 11 SE is not likely to be available at retail, they also say they don’t restrict the sales of Windows 11 SE devices.

That leaves plenty of wiggle room for any enterprising retailers that should decide at some point to sell Windows 11 SE computers to the general public.

Although it isn’t directly relevant to your question, here’s another question and answer from that same document that might interest you:

Question: I purchased this Windows 11 SE device for school use, but I now want to use it for personal use. How do I install Windows Home / Pro on it?

Answer: Windows 11 SE is intended for educational organizations that use cloud-based identity management and security for their students and devices. We built it with a streamlined interface and restricted, education first app choices, based on feedback from educators. Windows 11 SE is not intended for personal use. We expect that most customers would find Windows SE too restrictive on a personal device. However, if you’d like to use a Windows 11 SE device for personal use, you may purchase a license for the version of Windows you’d like, completely erase all the data, files, settings, favorites, and the Windows 11 SE operating system on your device, and install your licensed version of Windows. After that, there would be no way to get back to Windows 11 SE.

In a nutshell, that answer basically says you can always replace the Windows 11 SE installation on a PC with either Windows 11 Home or Pro, but once you remove Windows 11 SE from the machine you’ll never be able to reinstall it if you change your mind.

Bottom line: While there’s always a chance that you’ll be able to buy a Windows 11 SE computer from a retail store some day, you probably wouldn’t want to due to the extreme limitations that Microsoft has placed that version of the operating system.

And finally, while you didn’t ask for a recommendation I feel I’d be doing you a disservice by not offering one. So here it is…

I strongly recommend that you not attempt to purchase a Windows 11 SE computer for general Internet use. It’s my sincere belief that you’d be better off simply opting for a Chromebook instead.

I hope this helps, Melanie. Thanks for a great question!