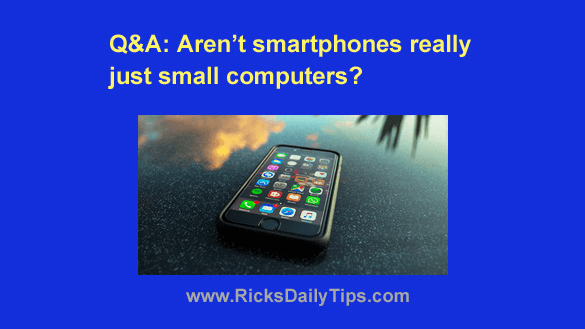 Question from Kevin:  Can you settle an argument between me an my cousin?

I told him that smart phones are really just small computers that are designed to make phone calls.

He said that since you can’t install programs on them or hook them to printers and stuff they can’t really be considered computers.

I think I’m right, but so does he. In your opinion, which one of us is right?

Rick’s answer:  Your opinion is the right one, Kevin. Actually, it isn’t an opinion – it’s a fact.

Even if you apply your friend’s “requirements” that a device must be able to run user-installed programs and connect to printers and other external peripherals in order to be considered a computer, smart phones easily meet that standard.

First of all, we do in fact install programs on our smart phones. We call them apps, but in reality they are computer programs that simply go by a different name.

We can also connect our smart phones to external peripherals such as printers, routers, monitors and even external hard drives. Depending on the phone and the peripheral, these connections can be made either via a cable or wirelessly via Bluetooth or WiFi.

What’s more, a phone doesn’t even have to be a “smart phone” to be considered a computer. Even the old “dumb” mobile phones of times past had a CPU, internal memory, input devices (keypad and microphone) and output devices (LCD display and speaker).

All of those components mean those ancient “dumb” mobile phones are actually really small computers.

When it comes right down to it, most any modern tech device is a computer at its core, including such common items as flat-panel TVs and home security systems.

Bottom line: You were correct when you told your friend that smartphones are really just small computers in disguise.