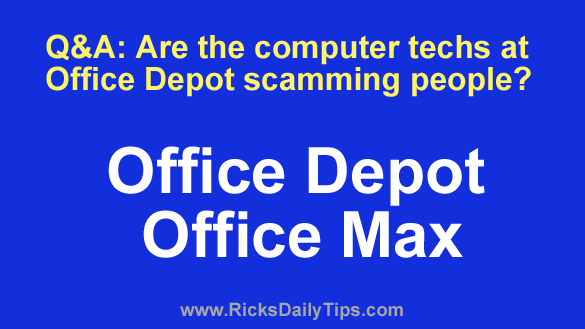 Question from Alison:  I heard Office Depot is scamming people when they bring their computers in for service.

If it is I’m gonna be furious because they just fixed my laptop a few weeks ago and it cost me $220.

Rick’s answer: Alison, the short answer to your question is “Not that I know of, but I seriously doubt it“.

Now having said that, I recommend that you read on for “the rest of the story”…

It’s true that Office Depot techs were caught in what was apparently a chain-wide scamming scheme back in 2016.

You can read about that scam and watch an investigative news report about it right here, but the gist is the techs at Office Depot stores were using fraudulent software to report that customers’ computers were infected with malware when they were actually squeaky-clean.

And then they would charge the customers a rather hefty fee to remove the non-existent malware.

How clean is squeaky-clean? Well, they somehow managed to find malware on at least one machine that was purchased brand new literally minutes before at a different Office Depot store.

After getting caught red-handed the company confessed to the scheme. They ended up getting hit with a $25 million fine by the Federal Trade Commission (FTC).

And now, back to my original “short answer”…

The reason I said “not that I know of” is because I did a search on Google News and the only news stories involving any type of fraud being perpetrated by Office Depot were related to that one fraud scheme that was uncovered in 2016.

In other words, the only news I could find related to your question was “old” news.

Why do I doubt that they are perpetrating any similar types of fraud to day? Here are my reasons:

1 – They got caught red-handed at scamming customers once and their reputation took a well-deserved major hit.

And my understanding is they’ve been working hard ever since to rebuild that lost reputation and trust.

2 – While $35 million is really just a pittance for a major corporation like Office Depot, the fine for a second offense would almost certainly be a lot larger – possibly even large enough to put them out of business.

I just have a hard time believing they would take that chance.

Bottom line: I really don’t know for sure whether Office Depot is scamming people in some way even after getting caught and heavily fined the first time around.

But for the reasons stated above, I seriously doubt it.

Now this is just my personal feelings on the matter, and yours might well differ from mine…

If I wasn’t a tech myself and my computer needed service, I wouldn’t take it to Office Depot when there are so many other computer repair facilities to choose from. Just sayin’.