You are here: Home / Tech News / Does your Apple device qualify for a new replacement battery?
674
SHARES
ShareTweetSubscribe 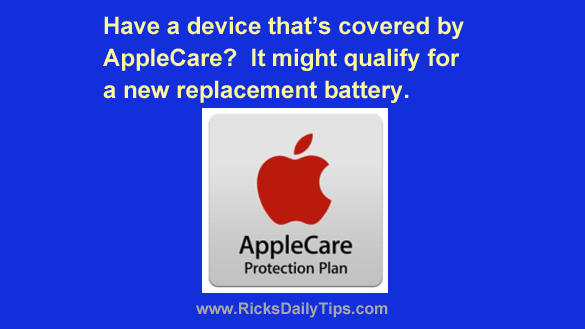 For reasons I explained in this post, I usually recommend skipping the extended warranty when you buy a new computer or mobile device.

That being said, plenty of folks disagree with me, and that’s fine.

If having your new computer or other device covered by an extended warranty gives you a warm and fuzzy feeling and lets you sleep well at night, then I’d say it’s money well spent.

And guess what? If you happen to have an Apple device that’s covered by an AppleCare Protection Plan, it might already qualify to receive a new battery at no charge under the plan.

In years past, Apple would make you wait until a covered device’s battery degraded to the point where it would only retain 50% or less of its rated maximum charge before they would replace the battery under AppleCare. But they have since upped that threshold to 80%.

The 80% threshold applies to the batteries in all AppleCare covered Macs, regardless of how old the machine happens to be. Apple mobile devices purchased after April 10, 2015 qualify as well.

Bottom line: If you own an AppleCare covered Mac, you should check to see if its battery will retain at least 80% of its maximum charge.

If it won’t, I recommend that you request a free replacement battery under AppleCare. You should also do the same for any other covered Apple devices.

Bottom line: New batteries are wonderful things because they allow you to use your devices longer between battery charges.

If you can get a new one installed in your device for free under AppleCare, why not do it now and reap the benefits of that expensive AppleCare Protection Plan?

Bonus tip: This post explains how to quickly determine the warranty status of your Mac, iPhone, iPad or any other Apple device.