You are here: Home / Tech Questions & Answers / Q&A: Can you recommend a good, lightweight and free antivirus app?
972
SHARES
ShareTweetSubscribe 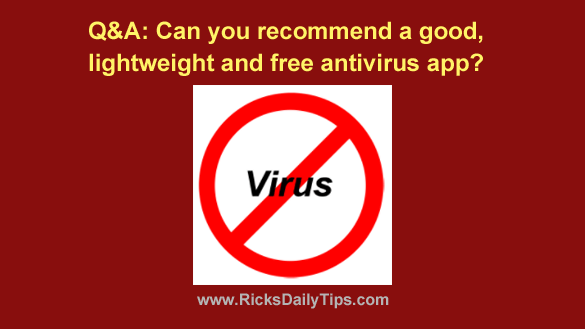 Question from Oliver P.: I need some advice for choosing an antivirus app for an older computer.

I have a Dell desktop PC with Windows 7 on it. This machine came with a pair of 2GB RAM sticks installed for a total of 4GB of RAM.

One of the RAM sticks went bad so I removed it.

I not going to replace the bad RAM stick because I’m planning to just use this computer offline for various things since Microsoft has stopped supporting Windows 7.

This machine still runs just fine but I’ve noticed that runs quite a bit slower that it did with 4GB of RAM.

I removed several programs and that made it run a little faster. Then I removed Norton antivirus and it helped a lot.

I like the faster speed I get without Norton but I don’t want to use the PC without some kind of antivirus software on it.

Can you recommend a good antivirus app that’s free and really lightweight, but will still be effective at keeping viruses off my computer?

Rick’s answer: Your plan sounds like a good one to me, Oliver.

To answer your question, there are several really light (and therefore fast) antivirus products out there, but the one I recommend that you try first is Panda Free Antivirus.

But that being said, there are more effective antivirus solutions out there. But Panda does meet your “lightweight” and “free” criteria.

If you aren’t pleased with the Panda solution I recommend you give Bitdefender Antivirus Free Edition a try.

Bitdefender’s free antivirus app is a no-frills, slimmed down version of their full antivirus program.

Like Panda Antivirus Free, Bitdefender should do a decent job at keeping your low-RAM PC malware-free.

But now, having said all that, I’ll say this…

You said you’re going to only be using this machine offline. If you never connect it to the Internet or insert media that were created by another computer you won’t really need to install an antivirus program at all.

The vast majority of viruses are distributed via the Internet these days so the chance of a machine that’s only used offline catching a virus is virtually nil.

Just something to think about…