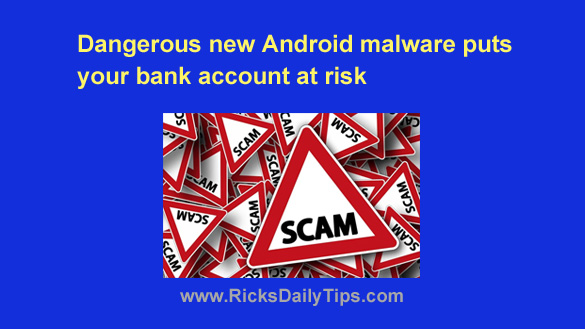 Unfortunately, there’s a new form of Android malware that potentially puts the bank accounts of every Android user at risk.

This dangerous malware is named Alien, and it’s unusually nasty because it has the ability to side-step Two-Factor Authentication (2FA) and allow the hackers to break into your accounts even when 2FA is enabled!

Another thing that makes Alien so dangerous is its ability to steal login information from over 200 apps without even infecting those apps themselves.

And to make matters even worse, a large number of those affected apps are banking apps. That puts your bank accounts (and the money that’s contained in them) at risk if your bank uses one of the vulnerable apps!

The creators of this dangerous new malware have managed to find a way to cause a fake login screen to pop up in affected apps even without injecting malware into the apps themselves.

That means the users of hundreds of completely legitimate apps that aren’t even infected with any type of malware are at risk of having their most sensitive information and money stolen by hackers via Alien.

Alien uses a number of different techniques to steal user information and take over a device, all of which are listed in this whitepaper from ThreatFabric. You’ll find that info about half-way down the page in the “Alien” section.

I recommend that you take a few minutes to read that whitepaper. It’s a real eye-opener.

As you can see, this new Alien malware is putting the accounts of every Android user at risk, but there are several things you can do to avoid falling victim to it via your own device:

1 – NEVER install an app that isn’t available in the official Google Play Store. There’s always a reason why Google doesn’t allow an app into their repository!

Always bear in mind that apps installed directly from third-party websites and app stores are ALWAYS at risk of being infected with malware.

2 – Install and use a good antivirus app on your device. Personally, I use and recommend AVG for Android.

3 – The vast majority of legitimate apps only require you to log in once during each session – when you first launch the app!

Therefore you should always be suspicious of login screens that suddenly appear at times when you shouldn’t be seeing one, regardless of how authentic that login screen appears to be.

If in doubt, DO NOT interact with that log-in screen.

Instead, go into the “Apps” section of your device’s Settings and force the app to close, the re-open it. After the app is back open you should log out of your account and then log back in.

Bottom line: This new Alien Android malware is among the most dangerous malware ever released, but if you take care when using your device and follow the instructions listed above you should be just fine.