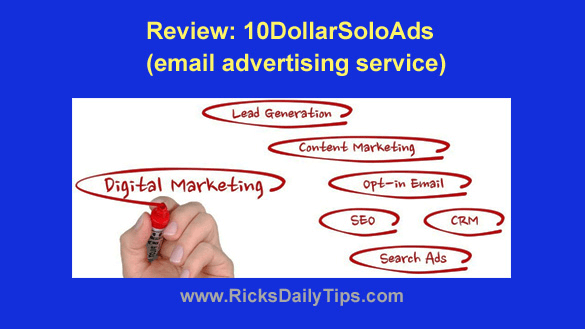 If you’re a blogger you’re probably always on the lookout for opportunities to boost your blog traffic.

Well, I recently began researching ways to boost the traffic to RicksDailyTips as well, and one of the tools I stumbled across is a service called 10DollarSoloAds.

This post is a review of my experience with them.

As the name implies, 10DollarSoloAds allows you to purchase a solo ad in a variety of relevant newsletters for the incredibly low price of just $10 per ad.

Since a solo email ad consists of nothing but YOUR ad with no other ads or info included with it, that would be a grand bargain – IF it was effective at drawing qualified leads to your offer.

I started off by doing a Google search for previous reviews of this service, and sure enough there are plenty of reviews and forum posts discussing the effectiveness of the ads placed by 10DollarSoloAds.

I’m afraid I have to report that what I found wasn’t encouraging, to say the least.

Customer after customer related their stories of purchasing ads through 10DollarSoloAds, and with the exception of three or four “outliers” the reviews were pretty negative.

Most of the negative reviews said they received about the number of clicks they were expecting, but not one of those “visits” resulted in a conversion of any kind.

Here’s just one example that’s fairly typical of what I found:

“I tried [10DollarSoloAds] this past week. I went for the monthly and will give it a full test, but my results so far are NOT good.

I have a good converting giveaway and thought I’d try to increase my list. So far, 133 clicks from them with 0 (ZERO) signups.

Are they doing the clicks themselves to increase them? I wonder. So far, I don’t recommend them.”

“I cancelled the monthly subscription and they emailed me and said they stopped the ads. I emailed and said I had paid for a month. No reply.

I then went to PayPal and filed a complaint. Then I got a nasty reply from 10DollarSoloAds accusing me of being dishonest.

Their customer service is as bad as their ads. I won’t ever use again.”

And finally, one more:

“Just wanted to give you guys my experience with them.

I also did a monthly, they guaranteed 100 clicks on the 1000 people they sent the ad too. Now my capture page is supposed to have about a 10% opt in rate so I thought that sounded like a great deal.

They sent out the ad and a week later I had about 225 clicks, (which was more than they guaranteed) however not a single opt in or lead.

My opt in does not cost any money, just plug in an e-mail address, and I did not get a single one.

I cancelled my subscription and will not be going back.”

However, not all the reviews were bad. There were a handful that didn’t offer any specifics but were good reviews overall. Here’s one of the few positive reviews I found:

“Hi, I have used 10DollarSoloAds & they are good. Even better I use their sister company called Advertyze.com you get more for your money plus us get good quality leads every week & a few optins.”

One thing I noticed about the positive reviews were they all mentioned Advertyze.com during their review of 10DollarSoloAds. That led me to believe those reviews were a little less than impartial.

In fact, it sounded to me like they were “planted” as an up-sell to the more expensive Advertyze.com service.

As you can probably imagine, I didn’t have high hopes for the results I would receive from advertising with 10DollarSoloAds, but being the inquisitive fellow that I am I decided to give them a try anyway just to see how things shook out.

My thinking was if I get a few blog visitors and newsletter signups out of the deal it might be worth it in the long run, especially since it would only set me back a mere ten bucks.

However, if things turned out as expected I would write a review recommending that other bloggers skip 10DollarSoloAds and spend their advertising budget elsewhere.

With the above in mind, I took the plunge and signed up for the basic $10 “Once per month” subscription.

The ad I placed was a teaser for one of my most-viewed blog posts. This particular post always results in several newsletter signups every time I link to it from one of my social media accounts.

That ad ended up receiving 342 “clicks”, but no conversions of any kind. Zero. Based on my past experience with this post it should have resulted in somewhere around 20-25 signups.

Not a very good result at all.

Almost all of those 342 visits lasted exactly 40 seconds.

What’s more, not a single visitor clicked a link to visit a second post on my blog, which is extremely unusual since the entire post consists primarily of links to supporting information.

I could be wrong, but that sounds a lot like “bot” traffic to me. I’m not saying it’s definitely bot traffic, but if those clicks were from real humans they were acting pretty much like a bot would act. Just sayin’.

Long story short, my experience with 10DollarSoloAds pretty much matched those of all the other dissatisfied bloggers who had tried them before I did.

While I did receive a fair number of clicks from the ad, the resulting traffic was worthless.

To their credit, 10DollarSoloAds provided my requested refund quickly and with no hassle whatsoever. I thought to be fair I should mention that since some of the previous reviews mentioned difficulty with getting requested refunds.

My recommendation: Steer clear of 10DollarSoloAds and spend your advertising dollars elsewhere.

And now, one last thing I feel I should mention…

I’m not a bit surprised by the way this test turned out. $10 for a solo newsletter ad is less than dirt cheap. Most legitimate solo ads are sold on a cost-per-click basis and 342 clicks would likely have cost me hundreds of dollars.

As they often say, “You get what you pay for.”