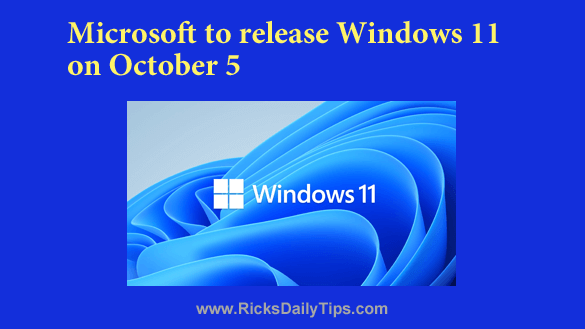 Microsoft has just revealed in this blog post that Windows 11 will be officially released on October 5, 2021.

On that date Windows 10 users will start receiving notifications that the update to Windows 11 is ready to be installed on their computers.

However, not all users will receive the notifications right away. As was the case with Windows 10, the Windows 11 update will be rolled out to the masses on a gradual basis.

What’s more, millions of users with older hardware won’t be receiving the notifications at all since Windows 11 can only be installed on relatively new PCs.

Microsoft has stated that users won’t be forced to update their PCs to Windows 11 if they don’t want to, even if their machines are new enough to run it.

Those deciding to stick with Windows 10 will be happy to know that Microsoft is committed to supporting Windows 10 with security updates until (at least) October 14, 2025.

This is a stark contrast to the rollout of Windows 10 when Microsoft eventually forced most everyone to update their machines to Windows 10 even if they preferred Windows 7 or Windows 8.1.

If you’re wondering when new PCs that come with Windows 11 preinstalled at the factory will be available for purchase, you can look for those new machines to start hitting the store shelves on October 5 as well.

In the blog post revealing the Windows 11 release date Microsoft also says you don’t need to bother waiting until October 5 to buy a PC with Windows 11 already on it.

Instead, they’re recommending that you go ahead and buy a new Windows 10 PC now and then install the update to Windows 11 after it becomes available.

However, I recommend that you wait and buy a new Windows 11 PC outright, for the following reasons:

1 – If you buy a PC that was designed to work with Windows 11 from the get-go you’re more likely to have a good user experience throughout the entire life cycle of the machine.

The reason I say that is because the hardware will come with the latest compatible Windows 11 device drivers, and that greatly reduces the odds of you having to deal with driver issues.

2 – Updating to a new Windows version doesn’t always go smoothly. In fact, as recent updates to Windows 10 have proven, updates frequently cause serious issues even when the updates are for the same version of Windows!

3 – As of the time of this writing, October 5 is only a little over a month away. That’s a very short wait to ensure that you’ll have the best user experience possible with your Windows 11 PC.

4 – That one month wait will give Microsoft time to discover (and fix) more bugs in the Windows 11 code. And trust me, there are plenty in there (there always are).

Bottom line: Windows 11 is coming soon, but you won’t be forced to accept it if you don’t want to.

What’s more, if you have an older PC you won’t be able to install Windows 11 on it at all.