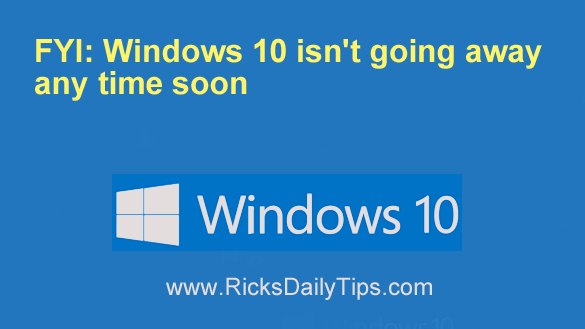 As you probably know, Windows 11 has been out for a while now and it’s quickly gaining traction in the marketplace.

But here’s a little secret…

Windows 10 is still very much alive and well.

If you really don’t want to update your existing PC to Windows 11 (or if its hardware doesn’t support Windows 11) you can still use Microsoft’s Windows 10 Media Creation Tool to download and install Windows 10 instead.

And here’s another little secret…

If you’d prefer to buy a new computer with Windows 10 preinstalled on it there are still plenty of them available for immediate purchase.

In fact, your local electronics retailer probably still has several Windows 10 machines in stock, and Amazon still has a large selection (#ad) to choose from.

I’ll finish up with this…

In case you’re wondering, Microsoft has committed to supporting Windows 10 with maintenance and security updates until at least October 14, 2025. That’s almost 4 years from now.

What’s more, there’s always a chance they could end up extending their support for Windows 10 even beyond that posted end date as they’ve done several times before with previous Windows versions.

Bottom line: Even though Windows 11 is beginning to take over the marketplace, there’s still plenty of life left in Windows 10 if you really don’t want to move on to Windows 11 just yet.