You are here: Home / Tech Questions & Answers / Q&A: Why is it risky to use two drives in a RAID 0 configuration?
836
SHARES
ShareTweetSubscribe 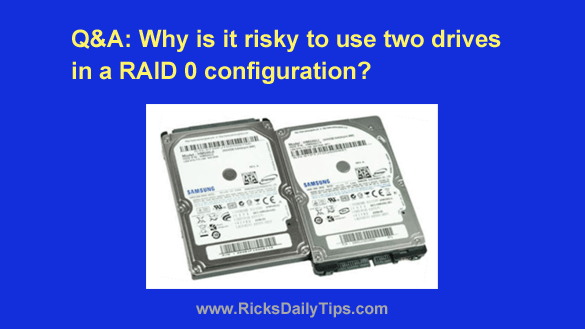 Question from Charlie:  I read an article last night about using two hard drives or SSDs in a RAID 0 configuration to speed up disk access speeds on my PC.

It said RAID 0 can speed up disk read and write speeds by as much as 50% but that it’s risky to use it.

The article didn’t explain why RAID 0 is risky. Can you explain it to me?

Rick’s answer:  Charlie, RAID 0 is risky (in relative terms) because if one drive goes out all the data stored in the array effectively becomes useless.

The acronym RAID stands for Redundant Array of Independent Disks, but that’s sort of a misnomer with RAID 0 because there is actually no redundancy at all.

In a nutshell, RAID 0 with two drives effectively doubles the risk of data loss because you now have two drives that could potentially fail instead of just one.

What’s more, if you have more than two drives in your RAID 0 array (most systems will actually support several drives in RAID 0 for even faster disk reads and writes), the risk is greater still.

The reason RAID 0 is so risky is because saved data is split into blocks and spread among all the drives in the array via a process called “Striping”.

Since no single drive receives all the data, if one drive fails the data that is stored on the other drives effectively becomes useless.

Let’s say you bury a treasure chest in an isolated area and draw a map to its location, then convert the map into a puzzle by cutting it into pieces. You then mix up all the pieces and store half of them in one lock box and the remaining pieces in a second lock box.

As long as you have access to both lock boxes you can retrieve the pieces of the puzzle from the boxes and put them back together and use the reassembled map to find your way back to the hidden treasure.

But if one of the lock boxes gets lost or stolen (i.e. one of your RAID 0 drives stops working) the pieces of the puzzle in the other box become useless because half of your map is missing.

As you can see, the article was right to say that it’s risky (relatively speaking) to use two or more drives in a RAID 0 configuration.

But that being said, the risks associated with using RAID 0 can be entirely mitigated simply by making regular backups of your data – something that we all should be doing anyway.

Bottom line: Using two or more drives in a RAID 0 configuration can speed up your computer’s disk reads and writes, but you should only use it if you plan to make frequent backups of your data.