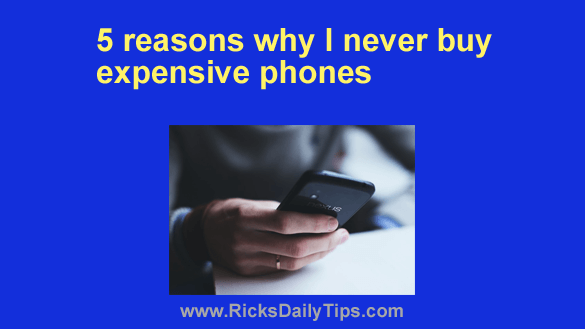 As you probably know, one can easily spend north of $1,000 for a new top-of-the-line smartphone these days.

And truth be told, you could well be one of the countless individuals who regularly spend that much every time you buy a new phone.

Let me say right out of the gate that there’s absolutely nothing wrong with that.

This is America after all, and we’re all entitled to spend our hard-earned money on whatever suits our fancy.

That being said, although I’m continually fascinated by the latest and greatest technology, I have never spent more than $150 for a phone that I purchased for my own use.

And I probably never will.In fact, the phone I’m using right now set back something like 99 bucks, plus tax.

As with all things in life, choosing a smartphone simply boils down to personal preference.

While there are some “techie” things that I will pay a premium for in order to have the latest and most capable technology, a smartphone isn’t one of them.

Here are five reasons why I never splurge on an expensive phone:

1 – Smartphone technology tends to progress a lot faster than my needs.

Every new generation of smartphones gets more powerful, and they generally get more dependable as well.

The $99 phone I’m using right now is just as powerful as a phone that would have cost me five times as much just a few short years ago. And it also has just as much memory as that phone would have had.

I primarily use my phone for the simple tasks of making phone calls, texting, checking my email and visiting a few favorite websites when I’m away from my computer.

I don’t need the latest and greatest technology for those things.

My “entry-level” 99 buck special does everything I need for it to do, and more.

3 – Entry-level phones are cheap (obviously), and they always will be (relatively speaking).

Sure, I could spend $1,000+ just to have the latest and greatest phone that’s available today, but guess what?

Next year there will be a slew of new latest and greatest phones hitting the market.

That means I would have spent roughly a grand on a phone that became dated technology in just one year.

What’s more, every year brings yet another slew of new latest and greatest phones.

That means in just two years that $1,000 phone would be two generations old.

Yes, you read that right. I’m just about as clumsy as they come.

Truth be told, I’d have a better chance at becoming a five-time champion on Jeopardy than at keeping the same phone more than a year or two without dropping it and cracking the screen or having it get lost or stolen.

Always having a cheap phone means I’ll never lose all that much the next time disaster strikes.

5 – Always buying cheap phones means I can always have a phone that’s never more than one generation old.

While I could go out today and pay $1,000+ for a brand new phone that has every latest feature except for the proverbial kitchen sink, I wouldn’t want to do that every year when the next generation of smartphones hit the market.

By always choosing a phone in the $99-$150 price range I can afford to buy a new smartphone each and every year and always end up with a phone that is more powerful than the one it replaced.

And guess what? I can replace my phone every year for up to ten years without having to spend a penny more overall than I would have paid for that one latest-and-greatest phone (which itself would have to be replaced long before the 10th year rolled around).

As I said earlier, the amount you decide to spend on a smartphone will (and should) depend entirely on your own personal preferences. It’s your life and your money, and if you really want to spend it on an expensive phone every time the opportunity arises, I say go for it.

After all, we all have our own priorities and personal preferences, and yours are just as important to you as mine are to me.

Perhaps you enjoy playing resource-intensive games on your phone.

I’m talking about the types of games that would leave my $99 Walmart special smartphone gasping for air. Then by all means, pay what you need to pay in order to get a phone that fills your needs.

Or maybe you really take your smartphone photography seriously and you want a phone that has the latest and greatest camera. I’ll tell you right now the camera in my phone wouldn’t be anywhere near the quality you would need and want if you’re a serious smartphone photographer.

However if all you need is a phone that can make voice calls, send and receive text messages and emails while also occasionally visiting a few websites or playing a lite game or two, a cheap entry-level phone in the $99-$150 price range would likely serve you quite well.

I’d love to hear your opinion on this topic. Do you buy expensive phones, el-cheapo models or something in between the two?