You are here: Home / Computer Tips / What (and where) is the ‘Windows’ key?
578
SHARES
ShareTweetSubscribe 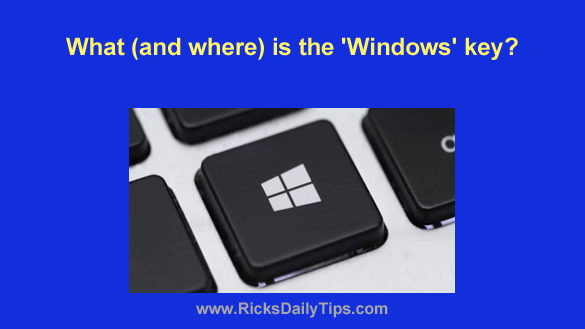 After reflecting on it a while I decided it might be a good idea to write a post explaining what the Windows key is – and just as important, what it looks like and how to find it.

What is the Windows key (and what does it do)?

The Windows key is a special key on a Windows PC’s keyboard that’s serves as a “Modifier” key.

In a nutshell, a modifier key is a key that alters the function of another key when those keys are pressed at the same time.

Where is the Windows key located?

Although the actual location of the Windows key can vary a bit, on most PC keyboards you’ll find it sitting in the lower left-hand corner of the keyboard between the Ctrl and Alt keys.

Most people are familiar with the Ctrl, Shift and Alt modifier keys because they are commonly used to perform a number of important tasks when using various computer operating systems.

Here are a few common uses of modifier keys:

Note: In the examples below, the “plus sign” simply means to press the keys before and after it at the same time. You don’t need to press the ‘Plus’ key on your keyboard.

Example 1: Pressing the Ctrl+S key combination will save the currently open file in most any program that works with user files.

Example 2: Pressing the Alt+Print Screen key combination will capture a screenshot of the active window and save it to the Windows Clipboard. You can then “paste” the captured screenshot into your favorite image editor.

Example 3: Even if you have never used the Ctrl or Alt keys you have surely used the Shift key to type an upper case character into a document or form.

Just like the modifier keys mentioned above, the Windows key also makes other keys perform an alternate function when they are pressed at the same time.

Unlike the other modifier keys mentioned above, you can also use the Windows key all by itself…

Press the Windows key without pressing any other keys along with it and Windows 10’s “Start” menu will open up.

Bottom line: The Windows key is one of the handiest keys on the entire keyboard because it allows a host of other keys to perform useful functions that are in addition to their primary functions.