You are here: Home / Tech Questions & Answers / Q&A: When you delete a file, where does it go?
578
SHARES
ShareTweetSubscribe 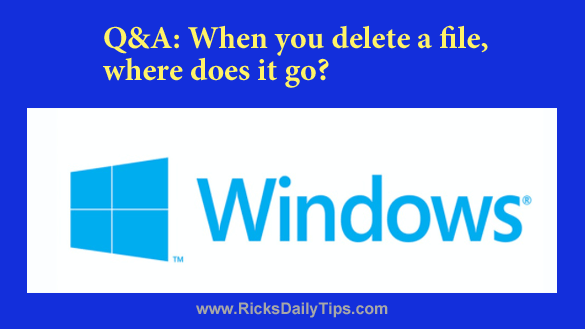 Question from Judy:  I have a question that’s probably going to sound dumb, but I’m curious.

I’ve been using computers for a long time and I’ve deleted a lot of files. Where do they go after Windows deletes them?

Rick’s answer:  That’s actually a very intriguing question, Judy. And I don’t think it sounds dumb at all.

Before I answer the question as asked, I believe it’s important to explain what computer files actually are (and aren’t).

In other words (as you probably already know) computer files aren’t physical objects like a book or a painting hanging on a wall. They are simply either electrical charges that reside in a bank of memory chips or magnetic forces that reside on a hard drive’s metallic platters.

When you delete a file on a Windows machine, all the “ones” and “zeros” that make up the file aren’t removed from the drive. They are still there and the “deleted” file can actually be recovered using special file recovery software.

What is deleted is the “pointer” that tells Windows where on the drive that file is stored.

If you lose the map, the treasure itself is still located where it was before. You just no longer possess the map that tells you where to find it.

If someone comes along and finds the map they can use it to locate the treasure, which of course takes away any opportunity for you to recover it yourself.

It’s much the same way with computer files…

Since deleted files aren’t actually removed from the hard drive by the “deletion” process, someone could use a file recovery program to recover the file.

However, if Windows needs the memory cells containing the “deleted” file to store a different file, it’ll see that storage space as being empty (because there is no longer a pointer telling Windows the file is there) and it’ll write the new file over top of the old one, wiping it out.

In short, files don’t really “go” anywhere when they are deleted. The storage locations containing their data simply changes state from zeros to ones and ones to zeros as required to represent the data in the new file.

Note: For the sake of simplicity, my answer ignored the fact that Windows temporarily moves deleted files into a special folder called the “Recycle Bin” that allows you to easily restore them if you want. But the concept discussed above applies regardless.

I hope this explanation didn’t leave you even more confused, Judy. Thanks for the great question!

Update from Judy:  I had to read it twice but now I understand what you were saying. Thanks so much for taking the time to answer.