You are here: Home / Tech Questions & Answers / Q&A: Why does my laptop have lines on the screen?
787
SHARES
ShareTweetSubscribe 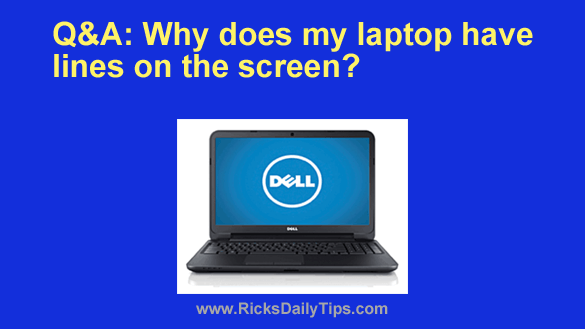 Question from Ginger:  I bought a refurbished Dell laptop about four months ago off the Dell website.

Everything was working fine until I clicked a link to read an article on my favorite website one morning, then I noticed 4 vertical lines on the screen.

At first I thought the lines were part of the web page, but when I closed the browser they were still there.

And they are still there even when the laptop is booting up with a black screen.

At first I thought I must have accidentally downloaded a virus somehow, but Norton doesn’t find one when I run a scan.

Do you have any idea what’s causing those lines, and how I can get rid of them? I can live with them if I have to, but I’d rather not.

I can assure you that the vertical lines on your screen aren’t being caused by a virus, and visiting that website had nothing to do with causing this issue. That was merely a strange coincidence.

Vertical lines are actually a common symptom of a hardware problem affecting a laptop’s screen.

It’s a pretty good bet that either the screen itself is bad, or more likely, that the cable that runs from the laptop’s mainboard to the screen either has a break in it or a loose connector.

Either way, this isn’t a problem that I would recommend trying to fix yourself.

Your laptop is most likely still under warranty since Dell provides a 1 year warranty on almost all of their refurbished machines.

Just contact Dell Tech Support and they should be able to tell you what you need to do in order to get this issue fixed, free of charge.

By the way, I recommend that you get this taken care of real soon because this type of problem only gets worse with time, never better.

If you were to end up waiting until after the warranty expires you’d either have to pay out-of-pocket to get it fixed or simply replace the laptop altogether.

Update from Ginger:  I called Dell and they’re going to fix the laptop under warranty. Thanks for your help, Rick.