You are here: Home / Tech News / Verizon throttled a fire department’s smartphone data while they were busy fighting a major wildfire
604
SHARES
ShareTweetSubscribe 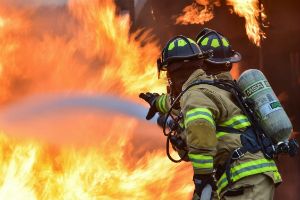 Sometimes corporations make decisions that are so bone-headed you just have to wonder what they were thinking. The most recent example comes to us courtesy of Verizon.

As you probably know, first responders in California are currently fighting dozens of major wildfires across the state.

And as you can imagine, fire-fighters and other emergency personnel rely heavily on their smartphones for critical communications between themselves and the folks who are directing the campaign to put out the fires and save the lives and property of thousands of California citizens.

One large fire department that’s been hard at work fighting the blazes had their devices’ Internet data speeds severely throttled by Verizon because every device they were using had exceeded the data limit allowed under their “Unlimited Data” contract.

Yes, you read that right. Even though the fire department was paying for “unlimited” data, they were only allowed to actually use a certain amount of data per device per month. After that amount had been reached, all additional data sent or received would be throttled to what basically amounts to dial-up speeds.

Truth be told, that isn’t at all unusual. Virtually all mobile “unlimited” data plans have such a limit on the amount of high speed data each device can use. But there’s more to this story…

Verizon has a policy saying they won’t throttle the data on the devices of first responders during an emergency, yet they throttled all of this particular fire department’s devices right in the middle of the largest wildfire emergency in the state’s history.

And to make matters worse, when fire department personnel called Verizon customer service to ask that the throttling be stopped they were basically told to pay an extra fee or their devices would remain throttled.

Of course these folks had more on their plate than they could handle, yet Verizon wanted them to take the time to arrange a special payment to have the throttling halted even though Verizon’s own policy was not to throttle the devices during emergency situations in the first place.

Due to the throttling these brave firefighters were unable to receive instructions and information about the fire’s status for several hours. They were effectively working in the dark.

I first read about this story at Ars Technica and I couldn’t believe what I was reading.

The moral to this story is two-fold:

1 – If you’re paying for an “unlimited” data plan with Verizon (or any other cellular provider for that matter), your data usage is not truly unlimited.

Once you reach the threshold specified in your contract your data speed will plummet to a virtually unusable level.

2 – If you use your smartphone for mission-critical activities, always have a backup plan for situations like this.

I guess we can file this one away in the “What on earth were they thinking?” category.