You are here: Home / Tech Questions & Answers / Q&A: Does my PC still need an antivirus app if I have Xfinity xFi Advanced Security?
841
SHARES
ShareTweetSubscribe 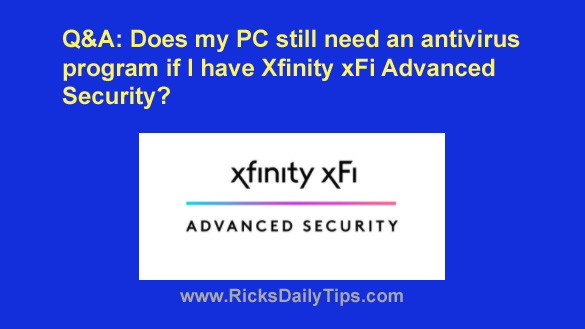 Question from Mike:  I have been a customer of Comcast internet for many years and have been happy to utilize Norton Security that was provided free to Comcast customers.

Recently Comcast has indicated that the Norton Security online will no longer be available after January 1, 2021.

Instead Xfinity xFi Advanced Security is already included at no charge.

They say we will have a full security solution with the Xfinity xFi advanced security.

Is this true that we don’t need any additional security to replace Norton Security?

Rick’s answer:  That’s a great question, Mike. And truth be told, there are lots of other Comcast customers wondering the same thing.

The short answer to your question is yes, you do still need to run an antivirus app on your PC (and on your Android devices as well).

Why? Because Xfinity xFi Advanced Security isn’t an antivirus program.

It’s actually a firewall that does an excellent job at stopping many types of security threats at your network’s gateway (the modem/router combo box that you’re renting from Comcast) and preventing them from ever reaching your computer and any other connected devices.

However, no firewall or security app is perfect. Some nasties will inevitably slip through at times, and that’s especially true of viruses.

And once a virus is on your machine Xfinity xFi Advanced Security can’t remove it, for the following reasons:

1 – As stated above, Xfinity xFi Advanced Security isn’t an antivirus app so it won’t be able to remove any viruses that manage to make it onto your machine.

2 – Xfinity xFi Advanced Security doesn’t run on your computer in the first place. (This is why you can use it along with a regular antivirus app without having to worry about them conflicting with one another.)

It works at the gateway level, blocking whatever nasties it can from making it onto your local network and to your devices.

But any viruses that do manage to make it past the gateway firewall and onto your device(s) are on there to stay unless you have an antivirus app on the device that can detect it and remove it.

The thing is Comcast themselves say as much in this Xfinity Community forum thread.

I recommend that you read that thread in its entirety because it isn’t very long, but here’s the relevant quote from it:

“One of the best ways to defend against network threats is by running antivirus software. If you haven’t already, install a software program, keep it updated, and run scheduled scans to keep devices free from viruses. Learn more about how to Download Norton Security Online for your PC, Mac and Android devices.”

As you can see, Comcast themselves confirm that you need to have an antivirus app running on your device(s).

The good news is you don’t really need to install Norton or any other third-party antivirus app on your Windows PC(s) because it already has a really good one running on it by default.

Windows’ native Windows Security app has gotten a lot better over time, and recent head-to-head antivirus tests have found it to work almost as well as the best commercial-grade antivirus apps these days.

When I say almost as well, that’s exactly what I mean.

While Windows Security is better than it has ever been in the past, it still doesn’t perform quite as well as its top commercial-grade competitors.

But the thing is, it doesn’t need to perform at that level in order effectively protect your PC.

When used in conjunction with Comcast’s Xfinity xFi Advanced Security firewall and the free version of Malwarebytes (which I always recommend to augment any full-time antivirus app anyway) your PC will be well protected from most any nasty the Internet can throw at it.

Bottom line: You do need to use an antivirus app on your PC(s) and Android mobile device(s).

However, you don’t need to install Norton or any other third-party antivirus program because the combo of Windows Security and the free version of Malwarebytes together will provide plenty of protection against any nasties that might happen to slip past your Xfinity gateway firewall.