You are here: Home / Tech Questions & Answers / Q&A: Is it ok to buy a used SSD?
932
SHARES
ShareTweetSubscribe 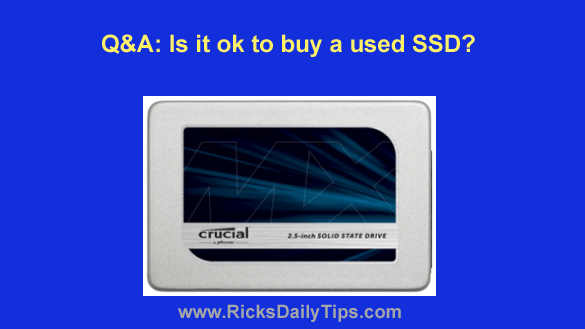 Question from Stephen R.:  I’ve been wanting to buy an SSD for my laptop for a while now, but the high prices for large SSDs have been holding me back.

I was checking on eBay last night and saw where a guy is selling used Crucial MX500 512GB SSDs for just $70 each!

What’s your opinion on used solid state drives? Do you think I should buy one?

Rick’s answer:  Stephen, installing an SSD as the boot drive in your laptop is probably the best upgrade you can make.

But that being said, I really think you should pass up this deal and buy a new SSD

There are several reasons why I don’t recommend buying a used solid state drive:

1 – Unlike traditional spinning hard drives, SSDs can only be written to a limited number of times, and every write action uses up a portion of an SSD’s useful life.

2- Even though a used SSD might appear to be working fine, it could contain non-working memory cells – a condition that tends to get worse in hurry once an SSD starts to fail.

3 – In today’s market, $70 for a used 500GB SSD isn’t really a bargain at all. In fact, you can that very same SSD brand new at Amazon for that same amount (or possibly less).

What’s more, you can add a few bucks to the $70 you’d have to pay for that used 500GB drive and get a brand new 1TB SSD instead!

Bottom line: I wouldn’t recommend buying a used SSD at any price, but even if I did I’d recommend checking on the current prices of new SSDs first.

As I mentioned earlier, SSD prices have dropped considerably and they’re now quite affordable compared to times past.

Bonus tip: Once you have your SSD in hand you’ll have to clone your hard drive’s contents onto it. This post explains the absolute easiest way to do that.