You are here: Home / Computer Tips / How to view (and use) two apps at once on your Mac
500
SHARES
ShareTweetSubscribe 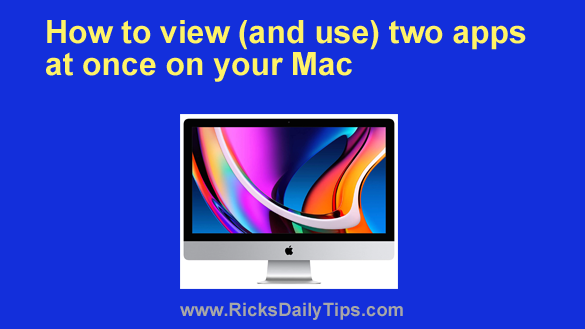 If you use a Mac there are probably times when you’d like to view (and use) two different apps at the same time.

That would have been fairly difficult back in the days of small screens, but with today’s wide-screen monitors there’s now plenty of room for showing two apps at once in windows that are large enough to actually be usable.

If your Mac is running macOS Catalina or later (and if it’s a relatively recent model, it should be), you can use a super-handy feature called “Split View” to make that happen.

1 – Open the two apps you’d like to view, then arrange them on the sides of the screen you want them on.

2 – Hover your mouse pointer over the green ‘Full-Screen’ button in the top-left corner of the app on the left, then select Tile Window to Left of Screen from the menu.

Your two apps should now both be in view with each of them taking up exactly half of the screen.

1 – Move your mouse pointer to the top of the screen to reveal the “window” buttons.

2 – Click the green ‘Full-Screen’ button in the top-left corner either app window.

Note: You might need to move and resize the two windows after exiting “Split View”.

That’s all there is to it. Now you know how to use your Mac’s “Split View” feature to view (and use) two different apps at one time.