You are here: Home / Tech Questions & Answers / Q&A: Can I use two Internet connections with one router?
1.3k
SHARES
ShareTweetSubscribe 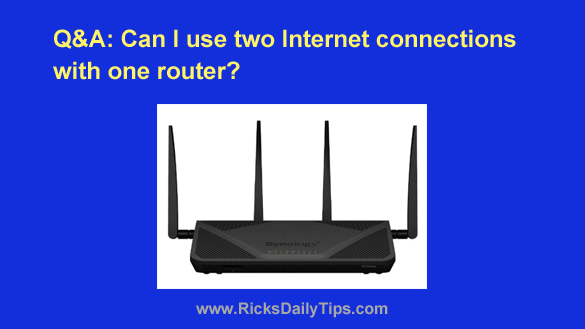 Question from Emile:  I’m in the process of opening my own third-party remote customer service business.

What I mean is my company will handle telephone and Internet-based customer service for companies that prefer to outsource that service.

I already have contracts with two companies and I’m slated to go live with the service in two months so I need to have all the technology in place by then.

Can you help me with an issue I’m struggling with?

It will be absolutely critical that my office have a working Internet connection at all times with zero downtime (or as close to zero as possible).

My question is can I have both ISPs connected to the same router at the same time or will I have to manually switch cables to the router if the Xfinity connection goes down?

Like I said, I really need to keep the downtime to as close to zero as possible. Would I need to use a different router for each Internet connection? If so, how do I get them to use the same network?

Any help you can provide will be greatly appreciated.

Rick’s answer: Emile, there are several ways to use two Internet connections with one network, but the one I recommend in your situation is setting up your network with a dual-WAN router.

A dual-WAN router will allow you to connect two high-speed Internet connections to a single router to create a single Wi-Fi and/or wired network.

The two Internet connections can operate in one of two modes:

2 – Load Balancing Mode – If you set the router to use this mode both Internet connections will be used at the same time, splitting the traffic between the two connections.

Load balancing is great for times when your network bandwidth is being maxed out because the total amount of Internet traffic will be split between the two connections.

Which mode you choose will be up to you, but I would recommend going with Load Balancing to take advantage of the extra total bandwidth that comes from the simultaneous use of two separate Internet connections.

Load Balancing actually gives you the best of both worlds…

While both Internet connections are active your Internet traffic will be split between the two connections.

However, if one of the connections goes down, the other connection will keep on working without skipping a beat!

There are quite a few dual-WAN routers on the market and they vary greatly in both quality and price.

If you’re looking for a recommendation I think you should take a look at this awesome dual-WAN router from Synology.

This is a super-fast router that has several other advantages in addition to supporting two Internet connections.

For example, it will allow you to block certain websites to prevent employees from using social media or other time-wasting sites while they are supposed to be working.

Also, if you use this router in Load Balancing mode your total effective Internet bandwidth can be as high as 2Gbps (depending on the max speeds of your two Internet connections).

Regardless of which router you decide to go with, I strongly recommend that you consider purchasing two identical routers and keep one of them on hand as a backup.

Having a backup router at the ready will allow you to get your network back up and running as quickly as possible if your router ever fails for some reason. This is very important since you stated that your office needs to have as little downtime as possible.

What’s more, if you already have the spare router configured with the same exact settings as the primary router, you’ll be able to swap out the routers in seconds if need be to avoid the downtime involved with setting up the router.

In other words, you’ll literally be able to unplug the bad router and instantly connect the spare in its place. Your total downtime can be seconds instead of minutes (or even hours).

Bottom line: While there are several ways to accomplish your goal of using two Internet connections with your business’ Wi-Fi network, I recommend using the dual-WAN router mentioned above.