You are here: Home / Tech News / The future of programming: What are the most promising languages?
315
SHARES
ShareTweetSubscribe 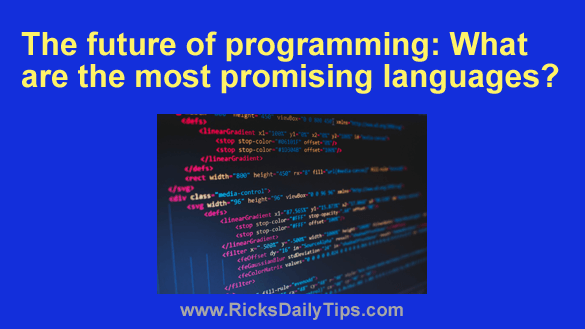 Currently, software development is one of the most sought-after careers.

Job growth for programmers is expected to increase by 21 percent between 2018 and 2028, more than four times the average for all occupations.

A software programmer can expect to make $106,000 a year on average, more than three times the average income of all Americans.

Despite this, not all programming positions are created equal. Understanding numerous programming languages may be advantageous in a wide variety of contexts, including the workplace and the development of various types of software.

It might be challenging to enter the software development sector if you don’t have any prior programming skills. However, as a university student, you can find resources, an essay, or free writing samples when you explore www.eduzaurus.com to get an in-depth understanding.

If you’re considering a career in programming, here are some of the most promising languages:

Because of its readability, Python is one of the best programming languages and most used language accessible to people of all levels of experience.

It’s an open-source, free programming language with a large community of developers, easy interaction with online services, simple data structures, and desktop applications based on a graphical user interface. For machine learning and deep learning applications, it is widely used.

For decades, Java has been one of the most used programming languages in large enterprises. For large-scale online applications, it’s a popular choice.

Because of its reputation for being exceedingly reliable, several huge corporations have decided to use it. To land a job in the software development department of a major company, you need to learn Java. In addition to taking a class or course to learn Java, you will need practical lessons as well as a book or several.

Many developers on campus these days don’t bother learning C at all. In contrast, others believe that doing so lays a solid basis for learning C++ later. Programming in computer science and other related fields frequently uses both languages.

Compilers for C and C++ may be used on various platforms, making C and C++ applications a lot more portable. Both C and C++ are regarded as high-performance programming languages.

Such programs include client/server applications, commercial goods such as Firefox and Adobe, and video games, all of which require a high level of speed. The average yearly salary for a C and C++ developer is $76,500.

Also known as “Golang,” the system-level programming language developed by Google is Go. This is also one of the best languages to learn. Distributed systems that need to connect via messages can benefit from this technology.

Even though Go is a young language, it already has a huge standards library and substantial documentation.

Go has a few cons, including that it hasn’t taken off outside of Silicon Valley. In most cases, Go is utilized for applications that require a lot of data processing. In addition to Google, Netflix, Twitch, and Uber all use Go in some of their apps.

Good command in any of the above languages can land you a great paying job after college. You should think about what kind of software you want to create before deciding which programming language to study. This is the best way to learn to code.