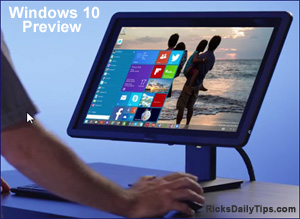 A couple of weeks ago I told you that Microsoft had hinted that they were planning to release Windows 9 in mid-2015.

Well, the timing was accurate, but the name was wrong. The new version of Windows will be Windows 10, not the wildly-speculated Windows 9.

Why they decided to skip the name Windows 9 and jump straight from Windows 8.1 to Windows 10 is anyone’s guess.

My own guess is they realized the name “Windows 8” left such a bad taste in the mouths of many users that they felt they really needed to distance the new version version of Windows from Windows 8 in name as well as in functionality.

At any rate, based upon the preview video they released this morning it looks like Windows 10 will indeed be a major improvement over Windows 8.  END_OF_DOCUMENT_TOKEN_TO_BE_REPLACED