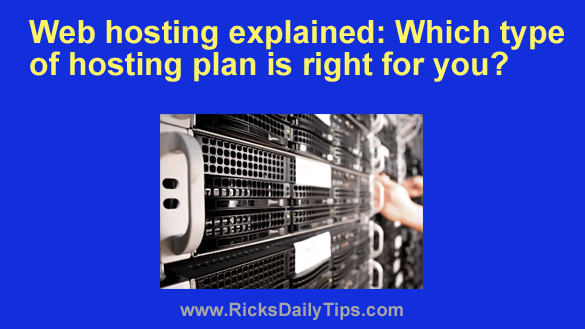 Are you thinking about creating a self-hosted blog or website but find the various options in web hosting to be extremely confusing?

I know just how confusing it can be when you visit a hosting company’s website and are faced with choosing the best web hosting plan for your website or blog.

Hopefully, I’ll be able to clear it all up for you in this post.  END_OF_DOCUMENT_TOKEN_TO_BE_REPLACED

When I built my first website back in 2003 I was pretty much in over my head. Even though it was a very basic site, I still found myself struggling with most every aspect of building and maintaining it.

One of the things I struggled with the most was choosing a good web hosting company. I tried a number of hosting companies and plans over the next couple of years, and finally found one that gave me the support I needed as I expanded the site and began to build more traffic to it. That company was Hostgator, and I can honestly say they are great!

As I learned more and built more websites and kept adding content to them, the traffic my sites were receiving on a daily basis began to grow exponentially. It soon became apparent that I desperately needed to move my sites onto a dedicated server. I chose the most economical plan that Hostgator offered, and was quite pleased with the results.  END_OF_DOCUMENT_TOKEN_TO_BE_REPLACED