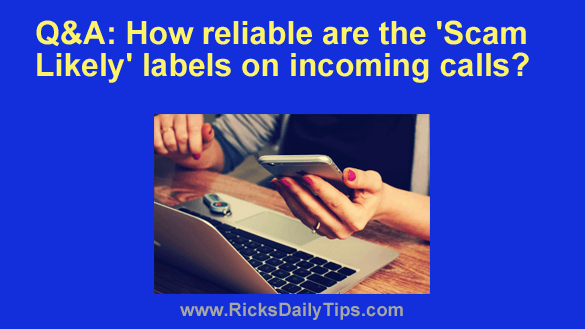 Question from Rhonda:  My cell service is from T-Mobile and they label calls they think might be from scammers as “Scam Likely”.

I get several of these “Scam Likely” calls a day and I’ve been just ignoring them.

But the other day I got a call from my friend (who lives out of state) and it mistakenly labeled her call as “Scam Likely”.

I didn’t answer it because I never answer those calls. I didn’t find out till later that she had tried to call me.

My question is how reliable are those labels in general?  END_OF_DOCUMENT_TOKEN_TO_BE_REPLACED

Beginning July 15, all T-Mobile customers who have a “Simple Choice” plan will be able to use their phones to make voice calls, send and receive texts and use their 4G LTE data anywhere in North America with no roaming charges.

The need to pay expensive roaming charges after crossing the border into Mexico or Canada has always been a major issue for cellular customers who travel between the U.S. and our two neighboring countries. But after the 15th, that issue will no longer exist for “Simple Choice” customers.  END_OF_DOCUMENT_TOKEN_TO_BE_REPLACED

T-Mobile has effectively put an end to wireless contracts, opting instead to allow all customers to sign up for “pay-as-you-go” service similar to the plans offered by Straight Talk, TracFone, Virgin Mobile and others. Could this be a trend sweeping the industry? I happen to think it is.

Pay-as-you-go cell phone service has been offered for years by TracFone and their no-contract brethren, but the concept really hit its stride when Wal-Mart jumped into the game with their Strait Talk service. The thought of being able to switch carriers at a moment’s notice without having to pay a penalty is causing customers to jump ship in large numbers when their contracts expire, switching instead to companies that don’t require a contract.  END_OF_DOCUMENT_TOKEN_TO_BE_REPLACED