You are here: Home / Tech Questions & Answers / Q&A: Should I buy solar panels or a generator for my RV?
556
SHARES
ShareTweetSubscribe 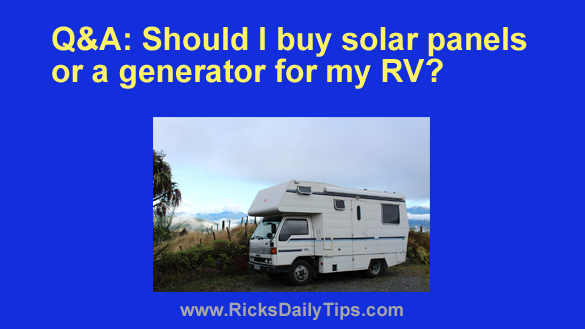 Question from Stanley:  My wife and I bought an RV and we’re planning to do some traveling (and of course camping).

Not a lot at first, just an occasional long weekend visit to one of the parks in our area (there are several).

Then after I retire in three years we’re going to hit the road and do some serious travelling (and LOTS of camping).

My question: Which is better for RV camping – solar panels or a generator?

Rick’s answer:  That’s a great question Stanley, but unfortunately there’s no easy “yes” or “no” answer because there are so many variables involved.

First of all, there’s the hardware you’ll need…

If you decide to go solar you’ll need to buy several items in addition to just the solar panels themselves, some of which will cost you a lot more than the actual panels.

A very basic solar power generating system intended just to run a few lights, a TV and a low-wattage small appliance or two will require the following at a bare minimum:

1 – A 100 watt solar panel (for converting sunlight into electric power).

2 – A solar-friendly battery to store the energy produced by the solar panel until you’re ready to use it (at night, for example).

3 – A solar charge controller to properly manage the amount of voltage and current that’s sent from the solar panel to the battery.

4 – An inverter to convert the DC power produced by the solar power generating system to the 120VAC that’s typically required to power most appliances.

Note: If you’ll only be using lights and appliances that operate on DC power you can skip the inverter and avoid that expense.

5 – Cables, connectors, fuses/circuit breakers and the other miscellaneous hardware that you’ll need to mount the solar components and safely connect them all together.

And that’s just for starters – like I said above, the bare minimum.

If you plan to operate larger appliances such as an air conditioner, a heater or a refrigerator you’ll need a solar setup that can supply more power than the simple 100 watt system described above.

And I can tell you that these items aren’t cheap. Just one decent-quality 12V/100Ah battery alone will set you back at least $300 or more, and depending on how many watts your solar system needs to supply you might well need more than one.

Now after reading the above you might be thinking I’m trying to dissuade you from going solar, but I’m really not. Depending on your situation, solar might actually be your best option.

Here are a few things to consider:

With a solar power generation system there is none because the components are all silent (except for the occasional whirring sound of a small fan).

While a solar system will likely cost a bit more than a generator up front, there are no ongoing expenses except for replacing batteries on occasion (and well maintained solar-friendly batteries typically last for years).

If you go with a generator you’ll have the up-front cost of the generator itself, plus the ongoing expense of buying fuel to run it (and as you know, both gasoline and diesel are rather expensive these days).

Do you prefer camping in wooded areas where there is little to no direct sunlight?

If so, an investment in a solar power setup would likely be a waste of money since your solar panel(s) would need sunshine in order to generate electricity.

4 – Frequency of your camping trips

Since you said you’ll be camping on an infrequent basis for the first three years you might be better off simply using a good inverter generator during that period of time. Then you can invest in a solar setup after you retire and you’re ready to use it on a regular basis.

So which way should you go, solar power or simply use a generator?

What you’ll need to do is carefully consider what your power needs will be while you’re spending time camped out in your RV.

Make a list of all the lights, appliances and other things you’ll want to power and add up the wattage consumed by each. That’ll give you a rough idea about how much wattage a solar power generating system would need to provide.

1 – How many solar panels you’ll need (will depend on the wattage supplied by the panels you choose).

2 – What type of solar charge controller you’ll need (there are several kinds) and how many amps it can handle.

3 – How large a battery (in terms of AmpHour (Ah) capacity) you’ll need, as well as what type and how many.

4 – Whether you’ll need an inverter or not (if even one of your appliances runs on 120 volts AC you’ll need one), the type of inverter you’ll need (modified sine wave or pure sine wave) and how many watts of AC power it can supply.

5 – What extras you’ll need to buy to mount all the components and safely connect them together.

If all of this sounds overwhelming, it doesn’t have to be. Truth be told, typical RV-class solar power generating systems are actually quite simple once you learn and understand the basics.

So where do you learn the basics? Well, the same place I did…

I strongly recommend that you check out Will Prowse’s DIY Solar Power with Will Prowse YouTube channel.

This guy is a walking encyclopedia about all things solar, and his videos explain everything clearly, using language that’s easy to understand and follow. Highly recommended!

And now, one final thought…

You asked whether you should buy solar panels or a generator for your RV. Well, if your budget will allow it you can always buy both!

Do you plan on camping mostly in sunny locations where your solar panel(s) will be able to work their power generation magic? If so, what if the weather turns nasty or it’s really cloudy the entire time you’re there?

Do you want to occasionally park your RV in the shade to avoid the oppressive heat of the hottest summer days? If so, your solar panels aren’t going to work very well.

Having both a solar power setup and a generator on hand will guarantee that you’ll always have the power you’ll need available for use by you and your family.