You are here: Home / Tech News / Want to make a quick $10 million? Turn in a hacker.
347
SHARES
ShareTweetSubscribe 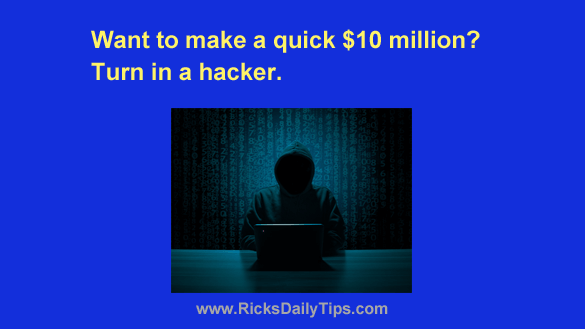 Could you use an extra 10 million bucks? Yeah, me too.

Well there’s a very easy way to earn it, and you can do it quickly, in a 100% legal manner.

In fact, it’ll be the U.S. Government that’s paying you!

So what is this magic ticket to quickly becoming a millionaire?

Just turn in a hacker!

As you probably know, there has been a rash of successful hacks in recent years, and Uncle Sam is finally beginning to get serious about putting a stop to it.

The U.S. Department of State has a program called Rewards for Justice, and it isn’t new. In fact, it’s been around since way back in 1984.

But with all the brazen hacks taking place nowadays they’ve decided to dust off the cobwebs with the hope of enticing confidential informants to provide information that leads to the arrest and conviction of any hacker that breaks into various types of computers and networks on behalf of a foreign government.

The program has paid out over $200 million since it’s inception, and the feds are looking to up that total by whatever amount it takes to put a stop to all the hacking that’s taking place.

You won’t qualify for the bounty by turning in just any hacker, however.

Both the hacker and the computers/networks targeted will have to meet the criteria laid out in the program in order for you to receive the cash.

But if you do manage to turn in a qualifying hacker you’ll be presented with the payout anonymously in order to protect you from retribution by the bad guys.

Sound good? If so, you’ll find all the info you need at the Rewards for Justice website.

347
SHARES
ShareTweetSubscribe
Thanks for subscribing!