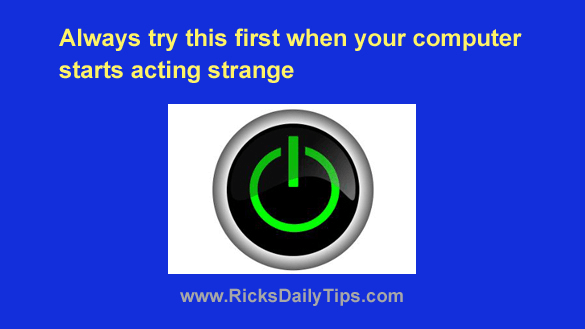 Have you ever been using your computer and had it start acting strange for no apparent reason?

I’m sure you probably have because it happens all the time.

For example, just the other day my Internet connection shut down and it simply refused to re-establish a connection.

A couple of days later the speakers just stopped working right in the middle of a video I was watching, and they refused to start working again even after I loaded a different video.

When those things happened I didn’t immediately jump into troubleshooting mode and start checking drivers or verifying system settings. I did this instead…

I simply restarted the machine.

And guess what? That simple reboot fixed both issues.

As you probably know by now, computers are very sensitive things.

Something as simple as a momentary power glitch that you don’t even notice can cause the contents of RAM to become corrupted, resulting in system instability and erratic behavior.

(Note: One way to greatly reduce issues cause by power glitches is to always keep your computer plugged into a quality battery backup device.)

Poorly written programs and other factors can also cause the data stored in RAM to become corrupted, leading to anything from erratic system behavior to freeze-ups and auto-restarts.

While system settings do get changed without our knowledge on occasion, it doesn’t happen all that often. In fact, those occurrences are quite rare.

Bottom line: I’ve discovered over the years that most issues that just arise out of the blue for no apparent reason are usually transient in nature and they can often be quickly “fixed” with a simple restart.

Therefore, that’s the first thing I recommend that you try every time your computer starts acting weird. (Hint: The same advice applies to your smartphone or tablet.)

Bonus tip #1: If your PC is acting weird and a restart doesn’t fix it, the next most likely cause is a malware infection.

This post offers step-by-step instructions for tracking down and removing any malware that might be on your system.