You are here: Home / Computer Tips / Should you completely drain your laptop’s battery before recharging it?
1.8k
SHARES
ShareTweetSubscribe 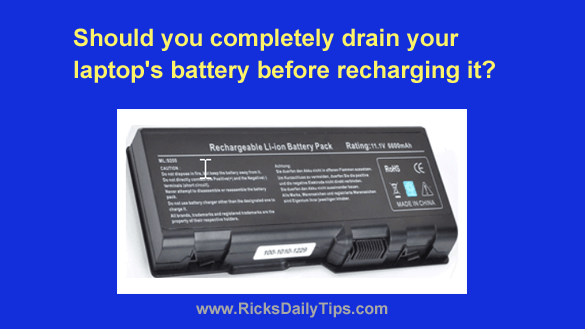 I’m often asked whether laptop batteries need to be drained completely before recharging them.

My answer? Well, it depends on the type of battery that it uses.

Early laptops used nickel-cadmium (NiCad) batteries which were subject to a “memory effect”.

If  NiCads weren’t allowed to discharge all the way before being recharged they would eventually “remember” the level of charge they fell to before recharging and act as if they were completely drained every time their charge decreased to that level.

This memory effect lowered the useful life of a charge dramatically, requiring the purchase of a new battery long before it should have reached the end of its useful life. Therefore, if you still have a laptop that uses a nickel-cadmium battery you should let it discharge completely before allowing it to recharge.

Luckily, there are very few NiCad batteries still powering laptops these days, so for most people this won’t be an issue.

The next generation of laptops used Nickel-Metal-Hydride (NiMH) batteries. Those batteries generally were an improvement over NiCads, primarily because they weren’t as susceptible to the memory effect.

The main problem with NiMH batteries was their comparatively short useful life.

The vast majority of laptops on the market today use lithium-ion (Li-Ion) batteries which work much better and last longer than their NiCad and NiMH predecessors.

As with NiMH batteries, Li-Ion batteries aren’t susceptible to the memory effect which means you can recharge them at any time. In fact, lithium-ions will last longer if you never allow them to fully discharge.

Another advantage of lithium-ion batteries over the others is how they hold their charge when the battery isn’t in use. The older batteries begin losing their charge immediately after being topped off, even if the laptop is turned off and not being used.

Lithium-ion batteries on the other hand will hold their charge for months with only a very slight drop in charge level.

Bottom line: If your laptop uses a lithium-ion battery you don’t need to let it discharge all the way before you recharge it. In fact, it’ll last longer if you don’t.

To find out which type of battery your laptop uses, simply remove it from the laptop and take a look at the label. The battery type will be printed on it.

If you have a laptop that doesn’t have an easy way to access the battery, simply Google the brand and model number and check the specs.

Bonus tip: This post explains how to save battery life by hibernating your laptop instead of putting it to sleep.