You are here: Home / Blogging Tips / How to get an immediate alert every time your blog goes down
828
SHARES
ShareTweetSubscribe 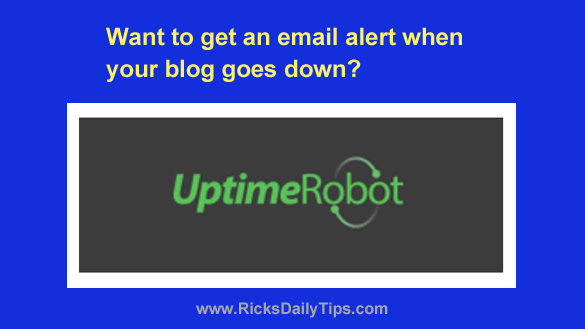 One of a blogger’s worst nightmares is having a busy blog go down and stay down for several hours. That happened to me a while back with this very blog.

I woke up one morning and discovered that RicksDailyTips.com wouldn’t load in my browser. It was completely “dead in the water” as the old saying goes.

I tried loading a couple of other blogs that reside on the same server, only to be met with the same depressing result. The server had obviously gone belly-up at some point during the overnight hours.

I quickly logged into my hosting account’s dashboard and initiated a chat session with a tech support rep. They confirmed that the server was indeed offline, and after a quick reboot everything was back up and running just fine.

Not knowing what to expect, I checked my blog’s traffic stats and saw that RicksDailyTips had only received 20 visitors by 6:06 am.

To put that number into perspective, this blog usually receives somewhere between 3,000 and 5,000 visitors during the 6 hours between midnight and 6 am.

That means the server must have gone down just a minute or so after midnight and stayed offline until I noticed it at 6 am.

That downtime turned out to be due to operator error (yours truly had made a mistake while installing a script) but the experience was a huge wake-up call for me.

Had I known the server was down I could have contacted tech support right away and had it back online within minutes. But instead there I was, just sleeping away as literally thousands of potential blog visitors received nothing but a blank page instead of my blog posts!

Determined never to let that happen again, I started looking around for a service that would send some type of alert to my phone any time my web server went down. I checked out several popular “downtime alert” services and finally settled on UptimeRobot.

I have UptimeRobot set to ping my web server every 5 minutes. If it receives an “all is well” response from the server it updates the log with that info and does nothing else until the time for the next “ping” check rolls around.

However, if the server doesn’t respond properly to a ping, UptimeRobot alerts me via their free mobile app that my server is down. That way I can contact my web host’s tech support team so they can take steps to get the server back online ASAP (which is typically 10 minutes or less).

My VPS from InMotion Hosting is super-reliable so periods of extended downtime are almost as rare as snowy days in downtown Honolulu, but if my server ever does go down I’ll know it almost immediately thanks to UptimeRobot.

In case you’re wondering, you can use UptimeRobot’s server monitoring service at absolutely no charge if you opt to receive your alerts only via the app. However, there is a nominal monthly fee if you wish to receive alerts via SMS text message as well.

Bottom line: If you happen to own a busy blog and worry about losing visitors (and possibly revenue) due to extended server outages, I strongly recommend that you sign up for UptimeRobot’s server monitoring/alert service.

Trust me, you’ll sleep a lot better at night knowing that your server won’t be down for hours on end while you’re snoozing away in your warm, comfy bed!