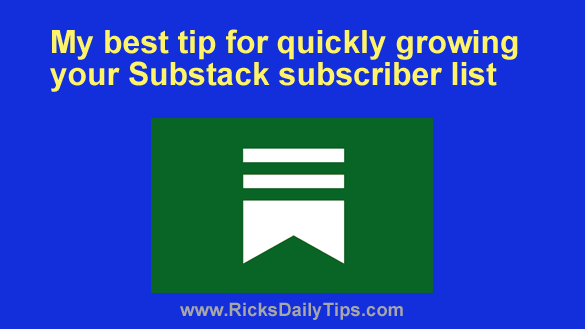 If you send out a Substack newsletter you might be struggling to figure out the best way to grow your subscriber list.

After all, it doesn’t matter how great your newsletter content is if no one is receiving it in their Inbox.

In this post I’m going to explain how I almost doubled the size of my Substack’s subscriber list from a little over 8,000 subscribers to over 14,600 in just one year.

When I first opened my Substack account I had grand illusions of people finding my Rick’s Tech Tips Newsletter on their own via Substack’s own internal distribution methods, but unfortunately that just doesn’t happen until your newsletter reaches critical mass.

However, there are several things you can do to kickstart your subscriber list and grow it faster than it would if it were allowed to grow organically.

The fastest way by far to grow your subscriber list is to purchase targeted ads in larger, already established newsletters, relevant blogs and other online venues, but most beginning Substackers don’t have an advertising budget to tap into.

Luckily, there are plenty of free ways to promote your newsletter and get it in front of as many potential subscribers as possible, which of course will result in a faster growth process.

I’ve tried several free promotional methods and the one that has worked best for me overall is cross-promotion with other newsletter publishers.

In a nutshell, cross-promotion is a deal in which two newsletter publishers agree to promote the other party’s newsletter with a shout-0ut, mention, recommendation or even a full-blown ad in one or more upcoming issues of their newsletter.

Pretty much anything is fair game – whatever the two publishers can agree on is how it will go down.

Cross-promotion works so well because it exposes both newsletters to an entirely different audience that’s interested in the same general topic. And if done correctly, it benefits both newsletters.

Like so many other aspiring newsletter publishers, I initially tried targeting newsletters with subscriber lists at least as large as my own thinking that would provide the most bang for my cross-promotion “buck”.

But truth be told, I quickly learned that isn’t really the best strategy.

While it’s true that getting your newsletter mention sent out to as many subscribers as possible in a single email can result in a quick rush of new subscribers, it takes time to seek out newsletters that have both a large subscriber list and a willingness to enter into a cross-promotion deal with you.

What has worked much better for me is cross-promoting with smaller, newer newsletters instead.

Yes, I know that sounds counter-productive, but it really isn’t. Here are four reasons why:

1 – Many publishers of smaller and newer newsletters will be eager to cross-promote with your newsletter in order to jump-start the growth of their own. And even more important, they’ll be willing to do it on your terms (as long as your terms are fair and reasonable, of course).

That means you can have a different cross-promotion deal ready and waiting for every issue you send out, resulting in a steady stream of new sign-ups.

However, if you only target the larger newsletters it could be quite some time between “spurts” of new subscribers.

2 – Cross-promoting with ever-changing smaller newsletters will ensure that your mentions are always seen by a bunch of fresh eyes.

3 – Small newsletters have the potential to become large newsletters, and those publishers tend to remember the people who gave them a boost early on.

For example, my cross-promotion with one new publisher resulted in a tripling of her subscriber base (52 subscribers to 161) in just one day.

While that might not sound like a very big deal, it really is when you’re struggling to get from # 52 to #53.

Today, that newsletter has over 6,000 subscribers and the writer still mentions my newsletter on a fairly regular basis with no prompting from me. And yes, we still do cross-promotions at times.

4 – Getting mentioned in lots of smaller newsletters will help grow your “brand” across a wide spectrum of newsletter readers.

For example, my niche is technology, but the tech world has many branches. Having mentions in newsletters that focus on as many of those branches as possible has really helped my subscriber list grow at a nice steady pace.

Choosing which newsletters to target…

The key to this particular cross-promotion strategy is finding smaller newsletters that are complementary to your own without being a direct competitor to it.

For example, I wouldn’t consider cross-promoting with another newsletter that also published tech tips, but I’ll gladly cross-promote with one that does tech product reviews or writes about the latest cutting edge developments in cellular technology.

Reaching out to publishers with your cross-promotion offers…

Once you have a list of newsletters to target you can send each of the publishers an email outlining your proposition.

As you can imagine, there are several ways to contact a newsletter publisher, but the easiest way is to simply subscribe to their newsletter and then reply to the welcome email.

Following up with additional offers…

Be sure to make a note of which cross-promotions end up working the best for you, then every few months you can contact those same publishers again for a new cross-promotion deal.

Yes, your Substack has already been mentioned in those newsletters, but they should now have a bunch of new subscribers that have never seen your mention before. New eyeballs equals new subscribers!

A well-planned and well-executed cross-promotion strategy can really give your Substack’s subscriber list the boost it needs in the early days while also drawing in new subscribers at an ever-faster clip for years to come.