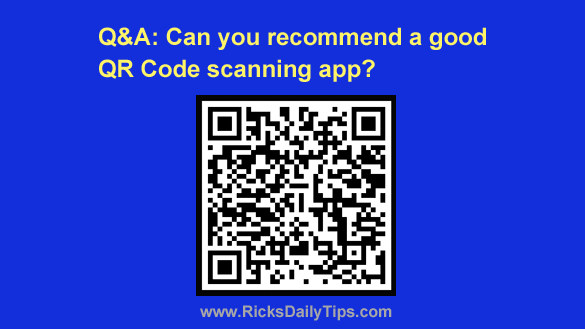 Question from Darla:  I hope you can help me, Rick.

I gained some weight over the last few years, and it’s really starting to affect my health.

I recently decided to start working out and eating better to try to get back to my “normal” weight of 140 pounds.

A while back one of my friends suggested that I download a QR code scanning app so I can get the nutrition info for the foods on restaurant menus.

That really does help a lot, but now I have a problem.

I went to a restaurant for lunch yesterday and saw an item that looked good. I tried to open the QR code scanning app but it wouldn’t open.

Last night I tried opening the app again and it still wouldn’t open. I uninstalled the app and went to Google Play to download it again but I couldn’t find it. It’s just gone.

Can you recommend a good QR code scanning app for my phone? It’s a Moto g STYLUS.

Rick’s answer:  I’m sorry you ran into this problem, Darla. But unfortunately I’m not a bit surprised that you did.

Apps are routinely removed from the Google Play Store for various reasons, the most common of which are the companies behind the apps either going out of business or getting caught using their apps to do nefarious things.

In your case it sounds like the company might have simply gone out of business since the app completely stopped working in addition to being removed from the Play Store.

That’s the bad news. But there’s good news as well…

I haven’t tested this on a Moto g Stylus but I’m quite confident that you can use its camera app to scan QR codes without having to install any third party apps at all.

Luckily, it’s very easy to find out. Just follow the steps below:

2 – “Point” the camera at a QR code and then hold the phone steady for a few seconds.

If the camera app recognizes the QR code a link will pop up on the screen letting you know that. Simply tap that link and the web page the QR code is pointing to should open up in your phone’s default web browser.

Give that a try and see how it goes. If the link doesn’t pop up try looking in the camera app’s settings for a switch to turn QR Code Scanning on.

By the way, this isn’t just an Android thing. The camera app in modern iPhones can read QR codes as well.

Simply open the camera app and point the camera towards the QR code and the link should pop right up!

And now, one final note…

Although some QR code scanning apps have extra features that aren’t available in your phone’s camera app, I don’t recommend using them unless you happen to have a phone that simply doesn’t have QR code scanning built in.

Here are the reasons for that:

1 – Every app you install on your phone uses some of the phone’s limited storage space (and it might even slow the phone down a bit).

2 – These types of apps almost always require permissions for things they really don’t need to do or have access to. And that directly affects your privacy.

Bottom line: You likely don’t even need a QR code scanning app on your phone. And if you don’t need one I strongly recommend that you not install one.

Update from Darla:  You were right. My phone reads QR codes just fine without the app. Thanks for your help.