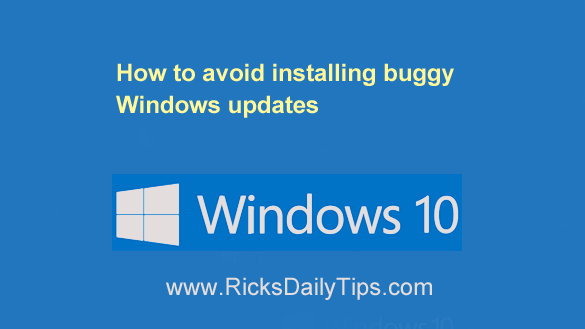 As you probably know, Microsoft has released several rather buggy Windows Updates of late.

In fact, thousands of Windows 10 PCs were rendered either unstable or unable to boot up into Windows by the most recent updates.

I still recommend installing critical security updates as soon as possible in order to quickly patch “zero-day” security holes before hackers have a chance to exploit them to break into your system.

However, I no longer recommend installing non-critical updates until Microsoft has had time to squash any bugs that might be in the updates’ code.

Luckily, Windows 10 now offers you the option of pausing updates for up to 35  days. That should be more than enough time for any bugs in the update to be discovered and fixed.

If you hear that a new update is causing problems you can tell Windows not to install new updates until the date you choose. Simply follow the steps below:

4 – Click the Windows Update link in the left-hand column.

6 – Scroll down to the Pause updates section and click Select date.

7 – Scroll down the list and select the date on which you want Windows to resume installing updates.

Note: I usually select a date that’s 10 days after the current date, but you can select a later date if you want Windows to wait a while longer before it begins installing updates again.

8 – Click the X in the top-right corner of the window to exit the Settings app.

That’s all there is to it. Now you know how to avoid having your system install a buggy update before Microsoft has a chance to squash the bug(s).

Once Microsoft has released a patched update to replace the buggy one you can repeat steps 1-4 above and then click Resume updates.

Or if you prefer, you can simply allow the pause period to expire, after which updates will resume automatically.

And now, a friendly warning…

You might be tempted to keep pausing updates on a regular basis to avoid the possibility of a buggy update being installed before you even have a chance to hear about it, but I strongly recommend that you avoid doing that.

As I mentioned above, newly-discovered “zero-day” security holes put your system at immediate risk of being hacked.

The hackers of the world are constantly examining the code of Windows 10 to see if they can be the one to find the next inevitable security hole.

Once someone finds one, the word gets out and other hackers immediately start probing Windows 10 PCs via the Internet to see how many they can find with the security hole in place.

They then attempt to exploit the security hole to break into as many of those vulnerable machines as possible before the security update to patch the hole is installed on the machines.

That’s why you really need to allow your PC to install important security updates as soon as possible after they are released.

Since pausing updates pauses ALL updates – including security updates – every day that updates are paused on your PC is a day when it is completely unprotected against newly-discovered “zero-day” exploits.

Bottom line: It’s a good idea to pause Windows Updates for a few days if you learn that a newly-released update is causing problems, but you do want to use that option judiciously to keep your PC as safe as possible from the hackers of the world.