You are here: Home / Tech Questions & Answers / Q&A: Why can’t my daughter use her own router in her dorm room?
846
SHARES
ShareTweetSubscribe 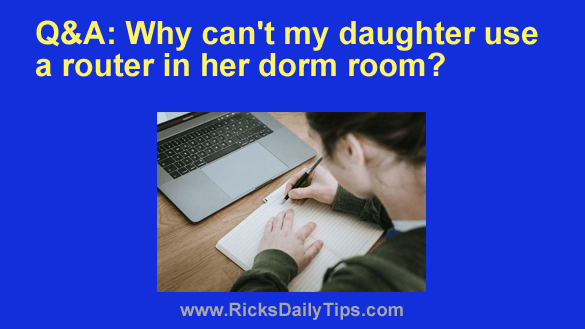 Question from Gretchen.:  My daughter started college this fall and she’s living on campus.

When she received her dorm assignment they also gave her a list of rules that she must follow.

One of those rules is she cannot use her own router in her dorm room. They told her she has to use the campus Wi-Fi network instead because a private router could cause problems with the school’s network.

Why is that? It doesn’t make sense to me.

I’d prefer that she set up her own Wi-Fi network so we can know for sure that it’s secure, but they won’t let her. Does their reason for not allowing students to use their own routers make sense to you?

Rick’s answer:  Yes, I’m afraid it does, Gretchen. Many colleges and universities prohibit the use of private routers on their campuses because they can potentially cause problems with the school’s own wired and wireless networks.

For example, the signals from dozens (or even hundreds) of student-owned wireless routers could potentially interfere with and disrupt the official wireless network on campus, not to mention the WiFi signals from all the other students’ routers.

What’s more, even routers without wireless capability can cause issues on the network for a variety of technical reasons, especially if one or more of them are configured incorrectly (and trust me, some of them almost certainly would be).

As might imagine, this scenario would drive the school’s IT personnel bonkers.

As far as security is concerned, I don’t think you’ll have to worry about the security of the official school-provided network on campus. Most institutions staff their IT departments with experienced technicians who are quite good at securing and locking down their IT infrastructure.

I hope this helps, Gretchen. I wish your daughter much success with her studies and her future career!

Update from Gretchen: That does make sense after reading your explanation. Thank you.