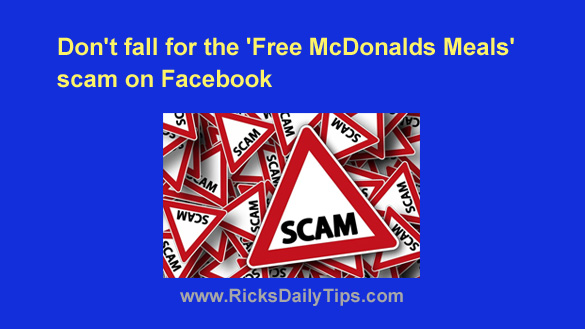 As you probably know, the scammers never take a break from Facebook.

One frequently recurring scam that rears its ugly head from time to time has scammers posing as the McDonald’s fast food chain.

And guess what? It’s back, just in time for the holiday season.

As usual, the scammers are once again claiming that every person who shares and comments on their post within the next 24 hours will receive not just one, but THREE large Big Mac meals for free.

This is the actual photo that’s currently making the rounds: 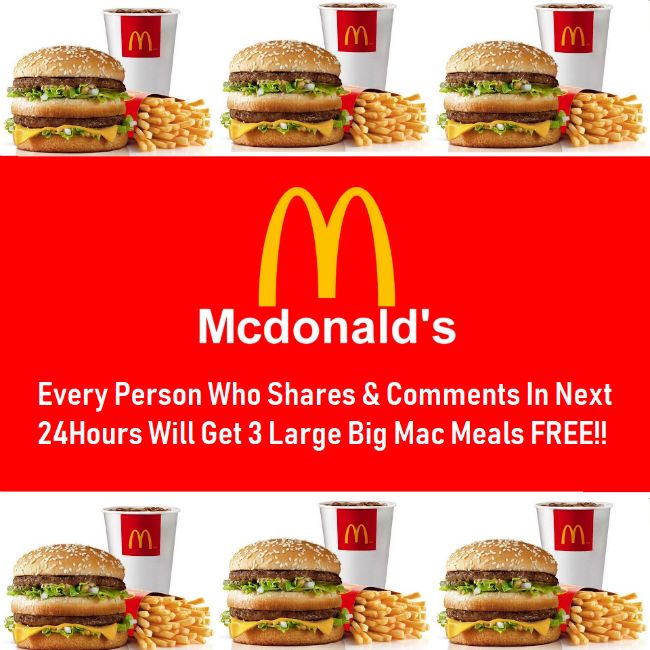 Sounds like a pretty tasty deal, right? Well, it isn’t.

This is simply a variation of this scam in which the scammer uses posts that are designed to go viral to amass a ton of likes, shares and comments on a new Facebook page they’ve created.

After the page has gained enough “popularity” to successfully exploit, the scammer either uses the page for malicious or dishonest purposes himself or sells it for big bucks to another scammer.

If you take the bait and end up sharing and commenting on these fake McDonald’s posts you won’t receive any free food from McDonald’s.

The only thing you’ll really be accomplishing by interacting with the post is helping a scammer grow a fraudulent Facebook page that will ultimately be used to cheat folks out of their hard-earned money or distribute malware to the masses.

By the way, if you see one of these fake McDonald’s posts in your newsfeed and click on the name of the page that posted it, it’ll take you to a page that looks like it could well be the official McDonald’s Facebook page.

But then if you look at the number of “likes” the page has amassed it won’t be anywhere near the roughly 80 million likes the real McDonald’s Facebook page has on it.

Bottom line: McDonald’s isn’t giving away free food to every Facebook user who shares and comments on their posts.

Besides the logistical nightmare it would require to keep such a promise, giving away all that free food would make a massive dent in the company’s bottom line.

After all, Facebook has around 2 billion users. Three free meals for every user at about 10 bucks per meal…well, you can do the math.