You are here: Home / Tech Questions & Answers / Q&A: Why is the screen in my MacBook Pro not working?
624
SHARES
ShareTweetSubscribe 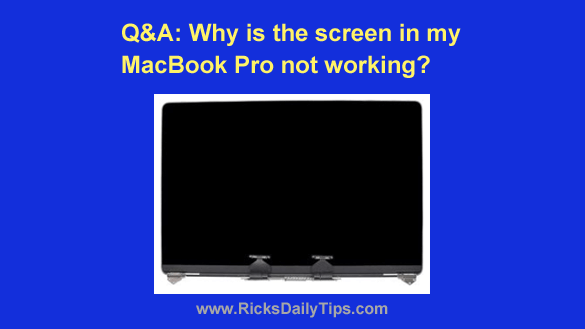 Question from Angela S.:  I hope you can help me with a computer problem, Rick.

I have a 2016 model 15″ MacBook Pro that has always worked perfectly till last night.

When I turned it on this morning the screen stayed black. Everything else seems to be working.

I tried closing and opening the lid a few times and turning the machine off and on but it always stays black.

Do you think the screen is bad? If it is how much will it cost to get it fixed?

I really can’t afford to spend too much due to my current financial situation.

The short answer is yes, the screen in your MacBook Pro will almost certainly need to be replaced, but the problem isn’t really with the screen itself. Allow me to explain…

The 2016 MacBook Pro line has a problem with the ribbon cable that connects the screen to the rest of the computer being stretched when the lid is opened all the way up.

Over time this stretching weakens the cable and causes it to eventually break.

The problem is it takes so long for the cable to actually break that many of these machines are out of warranty by the time the owner finds out there’s a problem.

Replacing a damaged ribbon cable in older model MacBooks was a relatively inexpensive repair because all the tech had to do was open up the machine and replace the cable.

But Apple changed the design in 2016 models and for whatever reason they integrated the ribbon cables directly into the screen assembly.

Unfortunately, that means the entire screen assembly will have to be replaced even though the problem is caused by a dirt-cheap cable.

You mentioned that you can’t afford to spend a lot on this repair, and that’s certainly understandable.

However, that means you won’t be able to send your MacBook Pro to Apple for the repair because they’ll charge you several hundred dollars for the service.

I recommend that you call two or three local privately-owned computer shops and ask them for quotes. Explain that you need to have your laptop repaired as cheaply as possible and see what they can do for you.

There are third-party replacement screens out there that are a LOT cheaper than the official Apple replacements screens. With any luck you’ll be able to get your MacBook Pro fixed at a price you can afford.

Just be aware that even the cheapest repair will still set you back a hefty amount because you’ll have to pay for both the screen and the labor cost for replacing it.

Bottom line: This won’t be a “cheap” repair but a local shop will almost certainly charge you a lot less than Apple or one of the chain electronics retailers would.