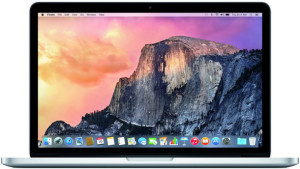 Apple’s Macbook Pro line of laptops has earned the reputation of being rock-solid performers, albeit at a slightly higher price than you would expect to pay for a Windows laptop with the same basic hardware specs.

Every Macbook that has been released was a great machine, and the sleek MacBook Pro MF839LL/A 13.3-Inch Laptop with Retina Display is simply outstanding. Although it comes with a slightly smaller 13.3 inch display, that display is a bright and vivid 2560-by-1600 “Retina” display that is simply a joy to use.

There is plenty to love under the hood as well, including a powerful 2.7 GHz dual-core Intel Core i5 CPU, 8GB of RAM and your choice of super-fast Solid State Drive (either 128GB, 256GB or 512GB).

This notebook is small enough to carry around with you wherever you go, yet powerful enough to get most any job done quickly and efficiently. It comes pre-loaded with the awesome OS X Yosemite operating system and a powerful battery that offers up to 10 hours of battery life.

Bottom line: If you have never used a Macbook Pro, you owe it to yourself to check them out. And if you have, you’re likely to find that this smaller model will do everything you expect just as well as Apple’s larger and more expensive offerings.