You are here: Home / Tech Questions & Answers / Q&A: Is it legal to install third-party firmware on a router?
795
SHARES
ShareTweetSubscribe 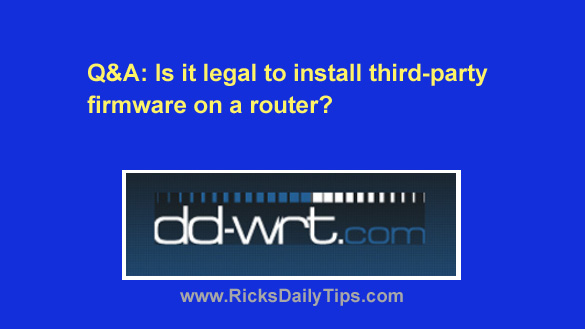 Question from Scott:  I have a relatively old Linksys router that my son recently installed DD-WRT on, and it works really well.

Last night I heard a guy say that it’s illegal to replace a router’s firmware with third-party firmware. I love DD-WRT but I don’t want either myself or my son to get into trouble over it.

Can you tell me if it’s really against the law to replace a router’s factory firmware with open-source firmware like DD-WRT? It seems to me that if it was you wouldn’t be able to download it.

Rick’s answer:  Scott, there was a lot of confusion over this issue in the past due to a statement issued by the FCC that led many folks to believe they wanted router manufacturers to make it difficult for users to install third-party firmware.

The FCC’s intention was to ensure that routers aren’t modified in such a way that they could interfere with other radio devices in the area, including increasing the power of the router’s radio transmitter to an unacceptably high level.

The confusion was (at least partially) cleared up by a clarification included in this November 2015 FCC blog post.

Bottom line: As of right now, it is not illegal to replace a router’s factory-installed firmware with DD-WRT or some other third-party firmware code.

And while I don’t expect that to change any time soon, when it comes to the government’s oversight of things like this you just never know what might happen in the future.

My recommendation is to enjoy using your DD-WRT-equipped Linksys router without worrying about what might happen years from now. You can always simply replace the router with a new one if and when the laws and regulations change.