You are here: Home / Tech Questions & Answers / Q&A: Why does my monitor take so long to display a picture?
1.6k
SHARES
ShareTweetSubscribe 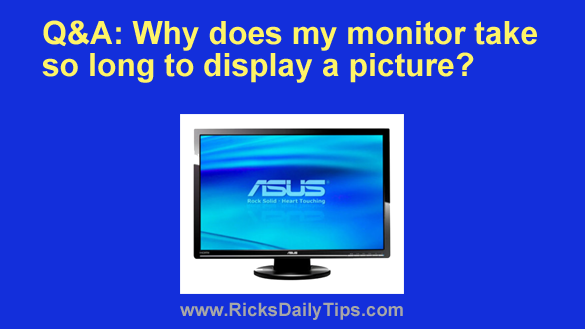 Question from Janie:  I have an Asus VW266 27″ LCD monitor that I’ve had for several years. I really like it and I’ve love to keep it, but I’ve started having problems with it.

About a month ago it started taking a minute or two for anything to be displayed on the screen after I turned the computer on.

The screen would just stay black for a couple of minutes, then display the picture.

These past few days it’s taking longer still for the picture to show. The screen stayed black for about 20 minutes this morning.

The crazy thing is once it decides to show the picture, it works perfectly until I shut down the computer. Then the problem rears its ugly head again the next time I turn it on.

I know the problem’s with the monitor and not the computer because it does the same thing when it’s plugged into three different computers.

What I need to know is can this be fixed for a reasonable fee or do I need to just buy a new monitor?

Rick’s answer:  Janie, this is a common issue that arises with plat-panel monitors as they age. The problem is usually bad capacitors that would need to be replaced in order to fix the problem.

As I see it, you basically have two options:

1 – You can take the monitor to a repair shop and ask them to give you an estimate for repairing it. Ordinarily, I would recommend just replacing a monitor this old, but since you said you really like this one it might be worth it to you to pay whatever it costs to have it repaired.

Just be aware that the repair cost is likely to end up being a big chunk of what you’d pay for a comparable new monitor, but you’d still have an older monitor with worn parts and out-of-date technology.

2 – Recycle the bad monitor and buy a new one. You can pick one up locally at Best Buy, Walmart, Office Depot or online from Amazon. (#ad)

Bottom line:  You can either have your current monitor repaired or simply recycle it and buy a new one – your choice.

For what it’s worth, I would just replace the monitor if I were in your shoes. But in your case, I can certainly understand why you might not want to.

Whatever you decide, I wish you all the best!