You are here: Home / Tech News / If you use incandescent light bulbs you need to stock up while you can!
510
SHARES
ShareTweetSubscribe 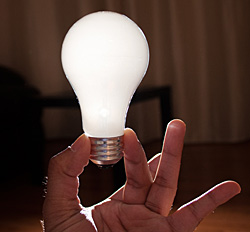 On January 1, 2014 it will become illegal to manufacture incandescent light bulbs in the U.S. or import them from other countries. This means if you use either 40 watt or 60 watt incandescent bulbs you won’t be able to buy any more of them once current retailer inventories run out.

This is all due to the passage of a 2007 bill that set minimum energy efficiency standards for light bulbs.

While the law doesn’t actually outlaw incandescent bulbs directly, it sets the standard for energy efficiency for each class of bulb so low that it would be impossible to design and make an incandescent bulb that meets them – which of course effectively makes it illegal to make them.

The good news is you’ll still be able to buy 40 and 60 watt incandescent bulbs after January 1st, but only as long as they are still available in stores. And as they say, once they’re gone, they’re gone!

Although most major retailers are expected to have enough stock on hand to last at least 6 months, I recommend stocking up early since prices are sure to skyrocket as the remaining supply of incandescents gets depleted.