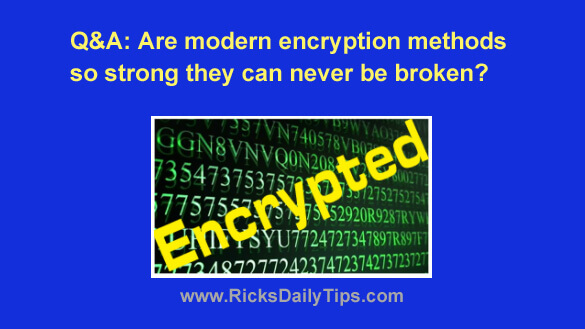 Question from Carl:  I was listening to talk radio the other day and I heard a guy say that the strongest encryption methods in use today are so strong that they will never, ever be broken.

The host didn’t challenge him on that. In fact, he seemed to agree with him. I have my doubts though.

What do you think? Is current encryption technology so good that no one will ever be able to break it?

Rick’s answer:  That’s a great question, Carl. Real food for thought, to be sure.

I agree that the latest encryption methods are extremely secure based upon what I have read about them, but I personally don’t believe they are so strong that they can never, ever be broken.

I’m certainly no expert in the field of cryptography, but I’m familiar enough with its history to know that encryption methods that were once believed to be unbreakable were eventually broken, and some of them were broken relatively quickly.

Our best scientists and engineers have used the world’s most powerful computers to create the strongest encryption methods in the history of mankind. It truly is astounding.

But the thing is, regardless of how strong future encryption methods might become, the computers that come later will likely be powerful enough to break them.

I believe future computers are virtually guaranteed to be thousands of times more powerful than even the most powerful super-computers that we have today. What’s more, our scientists and engineers are sure to keep learning more and more about the science of encryption as times goes on.

Bottom line: Although I don’t have a crystal ball that allows me to see into the future, I doubt if there will ever be an encryption method that can never, ever be broken.

Bonus tip: Speaking of security, did you know that a malware infection can allow hackers to steal your personal information right off your PC’s hard drive?

Well, it can. That’s why I recommend that you follow the steps in this post to track down and remove every trace of malware that might be on your computer.