You are here: Home / Tech Questions & Answers / Q&A: Can you still get Malwarebytes for free?
1.2k
SHARES
ShareTweetSubscribe 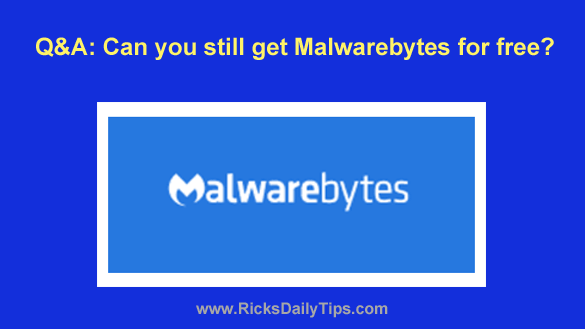 Question from Phyllis:  Hi Rick. I’ve been following your blog for a while now and I love the info you provide. Thank you!

In one of your posts you recommend running periodic malware scans with the free version of Malwarebytes.

I clicked the link you provided and downloaded it, but after the program was installed it said I have 14 days left in my free trial?

I know for a fact that I clicked the link to download the free version. Why did it install the trial version?

I even uninstalled it and downloaded it again to make sure, but it just installed the trial version again.

What ‘s going on? Do they no longer offer a free version of Malwarebytes?

Rick’s answer:  I really appreciate your kind words about my blog, Phyllis. Thank you so much!

To answer your question, Malwarebytes does indeed still offer a free version. And truth be told, that’s the version you actually downloaded and installed.

Malwarebytes recently merged their free version with the trial version of their commercial (paid) program. They’re now one and the same.

I know it’s pretty confusing. I really wish they’d clearly explain how the download works, but since they have yet to do it I’ll explain it here…

When you download the free version of Malwarebytes you’re actually downloading the trial version (as you’ve obviously discovered).

But don’t worry, after the 14 day trial period is over your Malwarebytes installation won’t stop working and you won’t be charged for the commercial version.

You won’t have to download and install anything else. The transition from the trial version to the free version is completely automatic and you won’t be required to do anything to make it happen.

And in case you’re wondering, the free version will do a fantastic job of tracking down and removing any malware that might be on your machine even without all the extra bells and whistles that come with the commercial version.

Bottom line: You indeed clicked the right download link and you WILL end up with the free version of Malwarebytes after the 14 day trial period ends.

By the way, I happen to think this is a great way for a software company to get you to try the trial version of their software because it gives you a chance to try the commercial version during the free trial period but automatically switch to the free version if you ultimately decide that’s what you want to do.

I’m hoping Malwarebytes will update their download page to better explain exactly how the transition from the trial version to the free version works because I’m sure you’re not the only person to be confused by it.

Update from Phyllis:  Thanks Rick. That really put my mind at ease.

Bonus tip: This post explains how to completely rid your Windows PC of viruses and other forms of malware using nothing but a handful of free tools (including Malwarebytes).