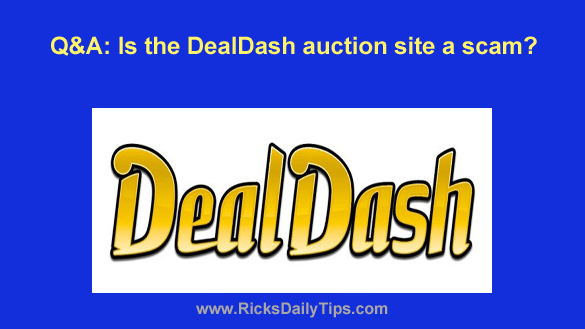 Question from Tammy:  I’ve been seeing a lot of commercials for the auction site DealDash lately.

They sure make it sound tempting but it seems to me like it has to be too good to be true.

I’d like to know your opinion about it. I’ve had pretty good luck on Ebay but the great deals mentioned in the DealDash commercials have me intrigued.

So my question is do you think DealDash is a scam or can you really get great deals on there?

Rick’s answer:  You actually asked two questions Tammy, and in my humble opinion the answer to both of them is no.

First, let me explain why I don’t believe DealDash is a scam…

In my way of thinking, any commercial enterprise can only be considered a scam if the people behind it either:

1 – Promise something they can’t (or won’t) deliver in return for your heard-earned money.

2 – They have stacked the deck against their customers in some way.

I don’t believe DealDash is a scam simply because they do deliver the items won by the winning bidders as promised AND every bidder has the same opportunity to win any given auction by placing bids according to the rules that are clearly explained on their website.

What’s more, DealDash has done a really good job of explaining exactly how the bidding process works as well as what it takes to win.

In fact, they have released a video that explains it all quite succinctly:

As you can see, there is no smoke and mirrors in play here. Everything is clearly explained and pretty easy to understand.

Now that we have established that DealDash is NOT a scam (at least according to my definition of a scam), I’ll explain why I believe it IS NOT a great way to win expensive items for a lot less than they are worth…

As explained on DealDash’s “How it Works” page and in the video above, every single bid you place costs you 60 cents.

However, at the same time you are bidding, other folks are bidding against you (also at 60 cents a pop). And every one of those 60 cent bids are non-refundable unless the bidders either end up winning the auction or buying one of the items outright at retail price.

In other words, you’ll be spending 60 cents for every bid you place, and you’ll have to pay DealDash that 60 cents per bid whether you win the auction or not. That means it’ll cost you $12 to place 20 bids.

Sounds pretty good, right? After all, surely you’ll end up winning if you place 20 bids, right?

Lets say you’re bidding on a $500 laptop and there are 30 other people bidding against you for the same item.

Since each bid placed only raises the current total bid price by a penny, it would take 100 total bids just to get the top bid amount up to $1.00.

That means by the time the price gets to $1.00 every bidder (including you) has placed at least three bids. That’s already a total of $1.80 spent per person, and top bid is still only $1.00.

And since you have all “invested” $1.80 in the auction you’ll all want to keep on bidding to try to win the laptop and not lose the money you have already spent on your bids.

By the time everyone decides to stop bidding and someone actually wins the laptop, every one of the 30 active bidders could easily have spent $25, $35 or even $50 or more on the bids they placed.

That could easily add up to $1,500 that DealDash will make on that $500 laptop, and that doesn’t even include the amount the winning bidder will pay as the winning bid amount.

As you can see, these auctions are a huge money-maker for DealDash even if every item sold at auction brings just a small fraction of its actual worth. Put another way, the company’s real profits aren’t in the winning bids amounts, but rather in the bids themselves.

As the commercials claim, the winning bidder could truly end up getting a $500 laptop for hundreds of dollars less than its actual cost (remember, the winning bidder gets his/her bid costs refunded so the actual cost will be the top bid amount), but the other 29 bidders are out 60 cents for each of the dozens of bids they placed in a losing cause.

Long story short, many (if not most) people end up spending big dollars on the auctions they participate in without actually winning many of them. That means over time most bidders will end up paying dearly for the few “huge bargains” they actually end up winning.

Of course participating in DealDash auctions is like anything else – the more you participate the better you get at it in terms of experience and bidding strategies.

I’m sure there are at least a few people who win more often than they lose. But for the vast majority it has to be just the opposite.

Bottom line: As they claim in their commercials, DealDash really is “a fair and honest auction” site and not a scam. But that being said, I don’t think it’s a site where you can really get the great deals they talk about in their commercials either.

Even though the rules are clearly laid out for all to read and understand and everything is on the up-and-up, the odds of the average person (myself, for instance) winning enough auctions to come out ahead financially are pretty slim in my humble opinion.