You are here: Home / Smart Phone Tips / No, iOS 7 will NOT make your iPhone waterproof!
349
SHARES
ShareTweetSubscribe

Social media sites are notorious for the numerous scams that make their way among their users, but a new one that’s currently making the rounds on Facebook and Twitter takes the proverbial cake.

This scam is being distributed in the form of an official looking, but fake Apple ad which falsely claims that your iPhone will become waterproof if you upgrade it to iOS 7. Yep, you read that correctly. The “ad” claims that a simple operating system upgrade can defy the laws of physics and prevent water from seeping into your iPhone’s case.

Apple is one of the Internet’s most popular targets for scammers and pranksters, probably because there are so many Apple devices in use today. Most every household contains at least one or two of them.

If you haven’t seen the fake ad yet, here it is: 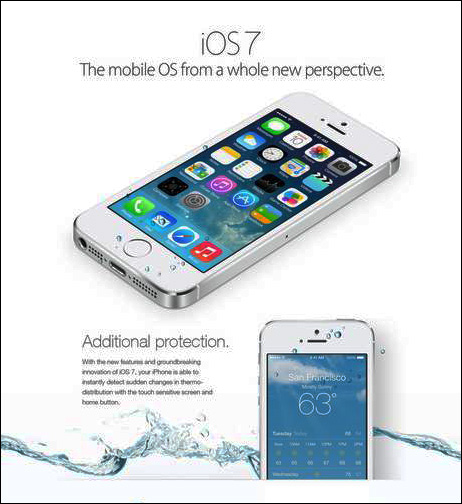 You’d think it would be virtually impossible to pull this much wool over someone’s eyes, but there are lots of folks falling for the scam if the numerous reports and complaints flooding in to Apple’s headquarters are any indication. Some folks even make the upgrade and then dunk their iPhone into the nearest puddle to test the “waterproofing” magic built in to the software.

Just in case you haven’t seen the ad yet, I’ll take a moment to state the obvious: No string of ones and zeroes (computer code) can seal the natural cracks and openings in an iPhone and block water from getting inside it and ruining the electronics contained within. Always remember to take any claims or “ads” you see on social media sites with an entire box of salt, not just a single grain.