You are here: Home / Tech Questions & Answers / Q&A: What does the term ‘Internet of Things’ mean?
1.3k
SHARES
ShareTweetSubscribe 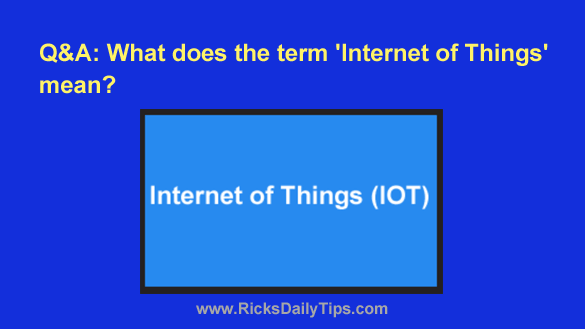 Question from Beverly:  I hope you can clear something up for me, Rick.

I consider myself to be fairly tech savvy for my age but I have no idea what people mean when they use the term “Internet of Things”, or “IoT”.

It seems like I see that term in a news article or on some website just about every day. Can you explain to me what it means?

Rick’s answer: I’ll certainly do my best to explain it, Beverly.

As I’m sure you already know, the Internet is a worldwide network of digital super-highways for information that allows us to interact with websites and other people in real time. It really is an incredible thing!

The way I see it, the Internet has evolved in three stages since its inception:

In the early days the Internet was almost exclusively used to allow computers to talk to one another (usually with a home computer or workstation talking to a server, a mainframe computer or even another PC).

These computer to computer interactions grew rapidly as the costs of Internet access went down, and by the early 2000s there were probably more homes in the US and other developed countries that had Internet service than homes that didn’t.

Smart phones and tablets eventually became affordable enough for most anyone living in a developed country to own one of them.

Modern phones and tablets can do virtually anything traditional computers can do, including allow us to use the Internet to visit websites, chat with friends, do online banking and engage in countless other Internet-related activities.

Today, there are actually more smart phones and tablets in use than there are laptop and desktop computers.

We’re now well into stage two with smart phones and tablets dominating Internet usage, but stage three is picking up steam as well.

In recent years the range of devices that can connect to the Internet has expanded far beyond just computers, smart phones and tablets.

Now even everyday objects in our homes and offices such as kitchen appliances, television sets, security cameras, thermostats, light fixtures, electrical outlets and countless other types of devices have tiny computers embedded in them that allow them to connect to (and be controlled over) the Internet.

For example, some recent models of heat pumps can be turned on/off and the temperature adjusted right over the Internet from a computer or mobile device that’s located far away from the home or office.

If you had one of these Internet-enabled heat pumps you could turn your thermostat down to 60 degrees when you leave for work in the morning to save electricity, then pull out your smart phone and turn it back up to 72 degrees an hour before you leave work to ensure that your home will be nice and comfy when you get there.

Another example is Wi-Fi security cameras (#ad). You could install a couple of these little jewels at your front and back doors and keep an eye on your home from anywhere in the world.

Bottom line: The Internet is now being used by “things” in ways that probably never even crossed the minds of the early Internet pioneers. Hence the term “Internet of Things”, or IOT.

I hope this cleared things up for you, Beverly. Good luck!