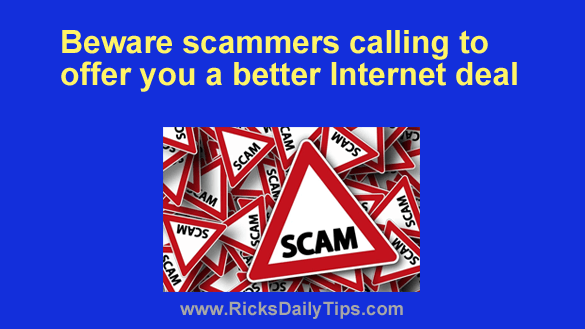 Of course that’s a good thing if you happen to live in an area where your only viable Internet options are satellite (and if you’re lucky, DSL).

After all, it’s always good when consumers are provided with real choices for higher quality service at a better price.

Unfortunately, as always happens in situations like this, these expanding Internet service options are being exploited by scammers looking to make a fast buck off as many innocent victims as they possibly can.

Case in point: There’s a new telephone scam in which the scammer calls up the residents of rural areas posing as a rep for one of the popular ISPs like Comcast or Verizon.

The scammer claims their company will soon be installing a high-speed fiber backbone through their community and they’re contacting folks in that area to offer them a really good deal for signing up for their super-duper high-speed Internet service in advance.

The names of the companies the scammers use and the fake deals they offer vary from scammer to scammer and from one part of the country to another, but the scams are always pretty much the same.

Here’s an example of one that folks in my area started receiving recently:

“Sign up now with Point Broadband and get Gigabit download speed for just $19 per month – and we’ll throw in free phone service for the first two years!“

Sounds like a fantastic deal, right? And it would be if it was real. But unfortunately it isn’t.

Point Broadband is indeed installing new fiber and expanding into many previously under-served rural areas here in my corner of Virginia. And by most accounts, the service they are providing is phenomenal.

The problem is the miscreants making the scam calls are not Point Broadband reps and they don’t work for a third-party marketing company representing Point Broadband.

They are nothing more than scammers, pure and simple.

Just to be clear, the ISPs expanding into new service areas are definitely contacting potential customers to let them know about it and to offer them some type of early-bird deal.

The problem lies in being able to distinguish between the real deals and the ones being offered by scammers.

If you fall for a scam you won’t end up getting a great deal on broadband Internet service. Instead, you’ll end up giving the scammer enough personal and financial information for them to steal your identity and/or wipe out your bank account.

Bottom line: If you receive a telephone call from someone offering to sign you up for broadband Internet service with a company that isn’t currently serving your local area, be very suspicious. These scammers are slick and their pitches are very easy to fall for.

If you have any doubt whatsoever about the real identity of the caller, don’t deal with them. Instead, hang up and call the company directly and ask their sales or customer service department if they are offering any type of early-bird deals to customers in your area.

If they really are offering those kinds of deals and they are planning to start providing service in your area, they can sign you up on the spot. If not, at least you can feel good about the fact that you managed to foil a scammer.

Important:  Make sure you visit the ISP’s official website and get the phone number from their Contact page. You can’t trust just any number that happens to pop up in a web search because many of those numbers are fraudulent themselves. Just sayin’.