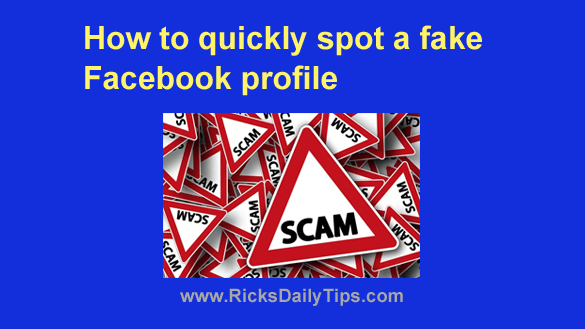 As you surely know by now, there are numerous crooks, spammers and scammers using Facebook to perpetrate scams and hoaxes on innocent people.

The miscreants use various methods and tools to scam their victims, and one of their favorite tools is fake Facebook profiles.

1 – A completely fake profile that’s made up out of thin air.

2 – Cloned profiles that were created by copying photos and information from the profiles of real Facebook users.

The completely fake profiles are usually very easy to spot. Here’s what to look for:

1 – The profile picture is a photo of a celebrity or an extremely attractive model.

While some scammers will steal photos of real, average looking people and use them as the profile pictures on their fake accounts, most of them like to use photos of really attractive men and women to entice their victims to accept friend requests from them.

If the person in the profile picture is very attractive and you don’t recognize them or if the photo is of someone famous, it’s a virtual certainty that the entire profile is a fake.

2 – The posts on the profile’s Timeline will have very little or no personal content.

If you take a look at the Timeline and see nothing but shared posts and links with no personal status updates, odds are the profile is a fake.

Most scammers are basically lazy by nature (that’s why they would rather scam folks instead of get a respectable job), and creating real content in the form of status updates isn’t easy. It takes work.

Most scammers are also in a hurry, and it takes a lot less time to share links and posts that others have put up than it does to write a realistic-looking status update.

3 – There aren’t many photos in the profile’s “Photos” section, and they’re pretty much all of the same person.

Most real users tend to upload a wide variety of photos to their Facebook accounts.

For example, there will be pictures of them with their kids and pictures taken at events like weddings and birthday parties. And vacation pics are quite popular as well.

Just anything and everything is fair game when it comes to uploading pics to Facebook. That’s why just a few pics of the same person is always such a huge red flag.

4 – If it’s public, check out the profile’s friends list.

If a profile has a lot of links and shared posts on the Timeline but just a handful of friends, it’s likely a fake profile.

Most scammers work on posting content to a fake account’s Timeline before they start adding friends to it in order to give the profile an air of legitimacy.

However, the reverse of this is often true as well. Some scammers prefer to load up the account with “friends” before they start adding photos and posts.

Just remember that a real user will typically add Timeline content and friends at roughly the same pace.

5 – You receive a friend request from someone who is already on your friends list. This is one of the best tip-offs that a profile is a fake cloned profile.

If you receive a friend request from someone you’re already friends with, check out the account’s Timeline and About pages.

Chances are you’re at least somewhat familiar with the types of posts and photos your real friend puts up on Facebook so anything that’s out out of the ordinary for them should stick out like a sore thumb.

While lots of people do create multiple real profiles for various reasons, they’ll usually give you a heads-up by saying something like “I had to create a new account because…“

Luckily, it’s very easy to determine whether a duplicate friend request is legit or not. Simply send the person a private message at the old account and ask them if the new account is really theirs.

If the answer is yes or you don’t receive any answer at all, then you can be fairly certain that the new account is legitimate. If the answer is no, you’ll know for sure that it isn’t.

That’s all there is to it. Now you know what to look for when you’re unsure about a accepting friend request from someone you don’t know or from someone you’re already friends with.