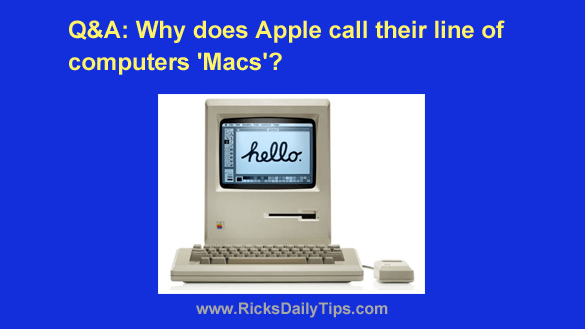 Question from Marion.:  Why are computers made by Apple called Macs?

That seems like a really odd name for a computer.

It actually sounds more like something you’d find on the menu at McDonald’s.

Rick’s answer:  I’m afraid I have to agree with you, Marion. At first glance the word Mac does seem like it would be an odd name for a piece of tech gear.

But truth be told, it actually makes sense once you know the rest of the story…

First, there was the Apple 1 (later renamed the Apple I with the number 1 replaced its Roman numeral equivalent).

These first Apple computers were designed and hand-built by Apple co-founder Steve Wozniak.

Wozniak only built about 200 of those original Apple I computers. If you’re lucky enough to own one of them today you have a mighty valuable keepsake on your hands.

Next came the Apple II and its various derivatives. The Apple II would end up becoming one of the world’s first successful mass-produced computers.

After the Apple II came the Apple III, a more expensive line of computers that was marketed and sold as a business computer.

Unlike the Apple II before it, the Apple III ended up being a disappointment for Apple due to a serious over-heating issue that irreparably damaged the machine’s reputation.

As a result, the Apple III would be the last generation of Apple computers to go by the plain “Apple” name.

After the Apple III the company released new machines with totally obscure names, including the ill-fated Lisa which failed miserably due its $9,995 selling price (an astronomical amount back in 1983).

But then came the “Macintosh”…

The original “Mac” was actually named the Macintosh by Apple employee Jef Raskin in honor of his favorite apple (the kind you eat) – the McIntosh.

The problem was another tech company had already trademarked the name McIntosh so Raskin added the letter a to turn the name into Macintosh.

That simple spelling change allowed apple to avoid getting caught up in a trademark dispute.

I guess that change turned out to be a good thing because (to me at least) the shortened name Mac just looks better on paper and screen than Mc ever would.

Anyway, the name Macintosh allowed Apple to keep the connection to the company’s name without having to use the actual name Apple (which had taken such a hit from the Apple III fiasco).

For the most part Apple has moved on from the long name “Macintosh” and now uses the shortened name Mac almost exclusively.

Apple’s many variations of Macs have been great sellers for years. And since they sell at premium prices compared to their Windows counterparts, they are extremely profitable for Apple.

And the rest, as they say, is history.

So there you have it, Marion. Now you know why Apple calls their current lineup of laptop and desktop computers Macs!