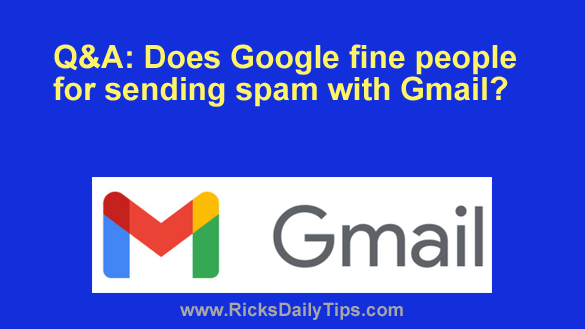 Question from Beverly:  I received an email from Google saying my Gmail account was caught sending spam.

They said I have to pay a $100 fine within 48 hours or my Gmail address will be shut down.

This seems like a scam to me, but the email looks real and I can’t afford to take a chance on losing my Gmail address. Everything I do online is linked to that address.

My question: Is this email legit? And is Google really fining people now for using Gmail to send spam?

Just so there’s no confusion, I have never sent spam to anyone, and I never will.

Rick’s answer:  Folks send reports of fraudulent emails to me all the time, Beverly. I thought I’d surely seen them all, but the one you described is a new one for me. Would you mind forwarding it to me so I can check it out?

Now the above being said, you can rest assured that the email you received threatening to shut down your Gmail service is a fraud. It was not sent by Google.

While Google does have strict rules against using Gmail to send SPAM messages, they would never basically agree to “look the other way” in exchange for payment of a $100 “fine”.

$100 is nothing to Google. There’s no way they would risk the reputation of their Gmail service in exchange for such a payment.

That doesn’t mean they don’t take action against against spammers, however. What they do is simply cut off the spammer’s access to Gmail.

But unfortunately, that doesn’t stop the spammers for long. They simply create a new email address and get right back to work scamming folks out of their hard-earned money.

In short, it’s just one huge game of “whack-a-mole” and the spammers usually end up winning.

The bottom line is this…

The “Google” email you received is itself SPAM, and Google had nothing to do with sending it to you.

I recommend that you first report the SPAM email to Google, then simply delete it and forget about it.

Update from Beverly:  That’s what I thought. I just wanted to be absolutely sure. Thanks for helping me.