You are here: Home / Computer Tips / How to quickly get a written transcript of any YouTube video
541
SHARES
ShareTweetSubscribe 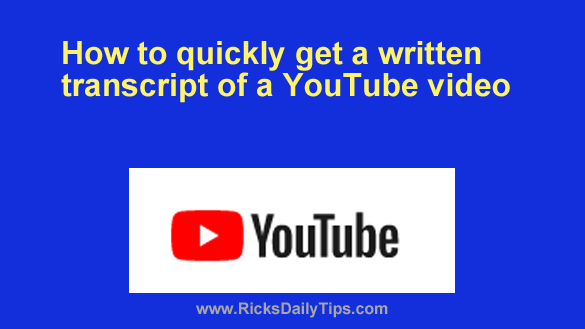 Have you ever been watching a YouTube video and thought it would be great to have a written transcript of everything that was being said?

There are certain situations in which a transcript can sure come in handy.

For example, if a video is featuring a chef preparing a recipe, a written transcript would probably be easier to follow while you’re preparing that dish later in your own kitchen.

Luckily, it’s very easy to display the transcript of any YouTube video on either a computer or a mobile device. Just follow the steps below for the device you’re using.

If you’re using a laptop or desktop computer:

1 – Start playing the video and then click the three dots icon on the far-right side of the menu bar (it’s just above the “Subscribe” button).

If you’re using the YouTube app on a mobile device:

1 – Start playing the video and then tap the down arrow on the far-right side of the video’s title.

You should now see a box on the screen containing a time-stamped transcript of everything that’s said in the entire video.

You can now scroll through the written dialog as you please. If you click (or tap) on a line of dialog the video will “jump” to the place in the video where that line is spoken.

If you’re watching the video on a computer you can save the transcript as a file and/or print it out if you want. Here’s how:

1 – Highlight all the text in the transcript by clicking on the word Transcript at the top and dragging your mouse all the way to the last line of text.

2 – Right-click and then select Copy from the pop-up menu.