You are here: Home / Tech Questions & Answers / Q&A: What’s the funniest experience you ever had while working as a computer tech?
1.5k
SHARES
ShareTweetSubscribe 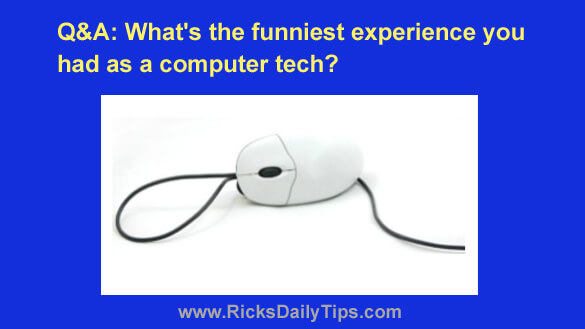 Question from Kevin:  I’m a retired computer tech and I have lots of funny stories to tell from my working days.

I’m sure you do as well.

What’s the funniest thing that ever happened to you while working as a tech?

Rick’s answer:  You’re right, Kevin. I’ve had quite a few funny experiences of my own over the years.

One that stands out is my experience with a “diseased rodent”…

I was working the tech bench at a Best Buy store (this was long before it was called the Geek Squad) and a guy comes walking in with a mouse (the “pointing” kind, not the “furry” kind).

He was carrying the mouse by the tail (the cord) and holding it as far away from his body as his arms would allow.

He carefully lowered the mouse onto the counter and asked me if I could fix it. I asked him what was wrong with it and he replied that it was infected with a virus that caused the mouse pointer to jump all over the screen.

Well, this was one of those old-style mice that had the little rubber ball that rolled around and directed the mouse pointer as you moved it back and forth on the mouse pad.

As was quite common with those “ball” mice, the little rollers that are moved by the ball had become covered with gunk and that was what caused the mouse pointer to jump around on the screen.

I showed the customer what the problem was and told him I could fix it by removing the junk.

I took the mouse into the back room and removed all the junk from the rollers, then took it back to the counter and tried to hand it back to the customer. He refused to touch it.

I tried explaining the following to the customer:

1 – Computer viruses consist of software code (and therefore they are not living organisms).

2 – It was impossible for a “ball” mouse to catch a virus because, well…they just didn’t work that way.

3 – Even if the mouse had been infected with a computer virus it wouldn’t have been able to pass it on to a human.

Long story short, the fellow ended up buying a brand new mouse and leaving the “diseased” mouse laying on the counter.

I guess it didn’t occur to him that if the mouse had actually been infected with a communicable disease he would have “caught” it long before he arrived in the store.

I’ve told this story many times over the years, and I’m usually asked if I thought the guy was just pulling a prank on me. I honestly believe he sincerely thought that mouse was infected with a horrible disease!

There you go, Kevin! That’s my story about the funniest thing that ever happened during my days as a computer tech.

Update from Kevin:  That’s a good one Rick. And it beats any of my stories, hands-down!