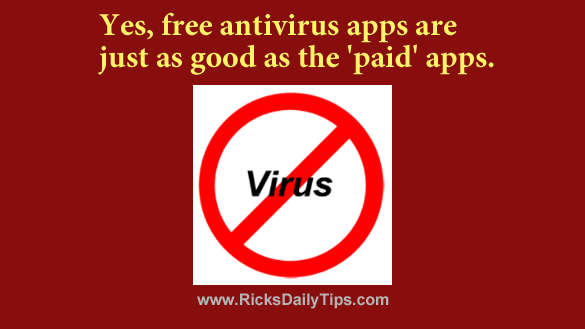 I’m often asked whether free antivirus programs are as effective at protecting a Windows PC from virus infections as their “paid” counterparts.

And I must say, that’s an excellent question.

Back in the early days of home computing my answer would have been no because the free antivirus programs available at the time were indeed inferior to the commercial programs.

But that has changed over the years…

Today, the free and paid versions of the most popular antivirus programs use the exact same antivirus engines. As a result, there are literally no differences between their relative abilities to prevent, track down and remove viral infections.

In my opinion the average user doesn’t need those extras (and yes, that includes the “free” tech support).

In fact, the latest head-to-head test by the experts at security research firm AV-Test actually found that both Avast Free Antivirus and Windows 10’s native Microsoft Defender scored perfect 6/6 scores on all three tested metrics, beating several other antivirus products – including some that don’t even offer a free version.

What’s more, this isn’t a one-off fluke. Avast Free and Microsoft Defender have been performing at or near the head of the pack for several years now.

Bottom line: I have long said there’s no reason to waste money paying for an antivirus program, and all the recent independent tests confirm it.

I recommend that you skip the expensive ‘paid’ antivirus apps and choose either Avast Free or Microsoft Defender.

You can then augment that protection by running frequent manual scans with the free version of Malwarebytes (to find and remove other types of malware that antivirus apps typically skip).

Bonus tip: This post explains how to ensure that your Windows PC is completely free of viruses and other forms of malware.